Final Tally of the damage..... and yet more pearls!

Well I've gone through all my jewelry and displays, and the final tally of damage from the storm in Hannibal and the tent falling apart is (drum roll please) :
1 tent
1 table
1 display bust
4 pieces of jewelry damaged.
so really, I got off lucky!! We bought a new tent for this weekend's show, I've cleaned all the displays and jewelry, and I've even fixed 3 of the 4 damaged pieces. The fourth piece I decided I didn't like that much anyway, and just took it apart for the usable bits that were left. So really really lucky!!

Since I've been on such a pearl kick, I thought I would share a few more pieces with you. This first pair of earrings I call "pearl tree". Next is a traditional Crystal and pearl set, done in creams and sterling.. my sister saw them and fell in love, so she's got them now. Last is a lariat, with matching earrings and bracelet. I love this!! I can remember making long linear lariats like this 8-9 years ago, and it looks like long is in right now, so I had to make one with pearls and liquid silver. The matching bracelet sold already... I'm sure the necklace and earrings will soon follow. 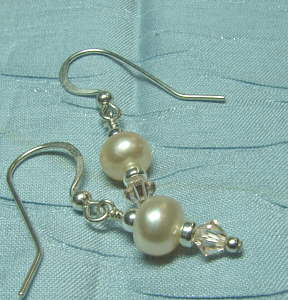 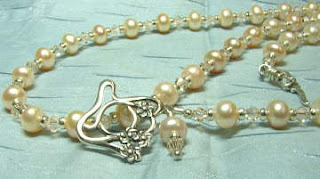 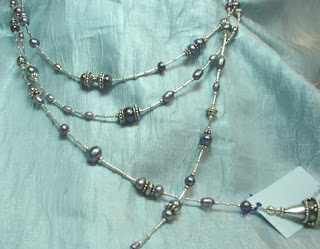 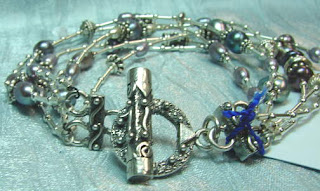 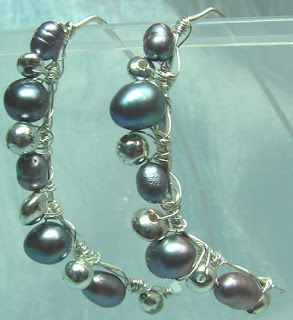 I'm especially happy with the earrings. I've been experimenting lately with handmade ear wires, but not your typical french hooks. I'm really pleased how these turned out. To have a wider platform to add the pearls to, I actually ran 20 GA wire half-way through my rolling mill, trimmed it and then filed the rough edges away. Then I shaped the ear wire part... I think these would look great in any one's ear!

Actually it's more accurate to say ring of wind... sign.... Right now it's 3:22pm on Sunday as I type this. Original plan: I would be wrapping up day 2 of the Hannibal Arts Festival in Hannibal Mo, hopefully making money hand over fist... In stead, 4 hours in on day one ( Sat) the wind picked up my tent and broke it. In the process, it knocked over 1/4 of my tables and displays, dumping them all on the hard, cold, and wet cement. All of my back stock was on that table also.. they got dumped to the ground. I don't know yet what extent of damage I have, I know I"m out my tent and 1 table. After I type this I'm going to check my jewelry and displays.. I suspect I'll have some damaged pieces I"ll have to fix and jewelry busts I'll have to replace. As the wind howled around us we scrambled to throw displays and jewelry into cases, just trying to get it all picked up before I lost more to the storm. Jerry ( my hubby) just carried all that to the studio.. today and tomorrow I"ll unpack, clean and repack our show stuff. I have another show in Saturday, so I need to buy a tent by then.. at least I've got extra tables around the house!

I know at least 3 other artists lost tents to the storm, and 1 pottery person's tent took out her whole display, and broke most of her stock. The tent next to ours also suffered damage... he was staying at least the rest of the day, while we packed up we kept watching his tent sink further down. So I know I"m lucky... what's more, during the worst of it ( mind you, this tornado like wind lasted maybe 15-20 minutes) I realized what's really important... no one was hurt. I lost sight of Jerry for about 10 seconds.. and I couldn't hear him... He was trying to hold the tent from flying, I was trying to keep the front displays from flying.. the tent sides were flapping like crazy, the Velcro pulled loose and enveloped him. I was scared for 10 seconds that something had hurt him... My 11 yr old daughter who I could see.. actually got lifted off the ground for a moment, trying to hold the tent down. I've told her in the future if her feet ever leave the ground again holding my damn tent, she's to let go... I don't ever want to see that again. And my tent didn't fly into something or someone else hurting them. None of my flying displays or jewelry hit or hurt anyone else. So I count myself damn lucky. I'm out a tent, a table and probably a few displays and jewelry. I'm not happy about it, but but it doesn't matter in the long run... we are all safe.

It's pretty upsetting to me to leave during a show, if you do shows at all, you know it's just not done... and it can get you black listed from some shows. The only other show I've ever left early, was at show like 3-4 years ago.. because the police told us to leave as a tornado was heading in our direction. The Hannibal people were real nice about it.. one of the volunteers actually gave me a hug, cause at that point I was pretty emotional, and she could see that. She told me it would be all right, and I really really appreciated that. But without a tent, displays etc, what else could I do but leave?
So we picked up the pieces and headed back to the hotel... it was 2 late in the day to cancel the 2ND night, so we just lazed around and watched TV, and the kid had a good swim in the pool. We even called around and checked the Internet, looking for another EZ-up tent to try to do Sunday. No go. So we got up early on Sunday and left for home b4 9am in the morning. So here I am typing. 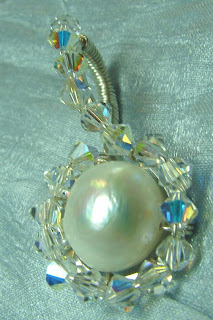 Anyway, I made this pendant a week or 2 ago, it's based on pendant I saw in a newspaper add for mother's day pendants. The original sold for 499.99 with diamonds all around a pearl. I used crystals and sterling to recreate the look. I like mine better. I've also included 3 different pendants I made back in march.. trying to catch up on my photos for the blog here... and 2 pearl bracelets I made. I've been in a real pearl kick of late, if you couldn't tell. 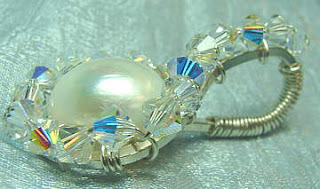 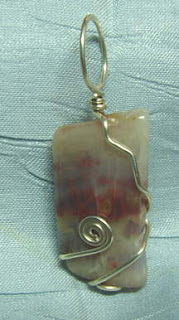 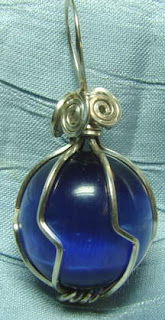 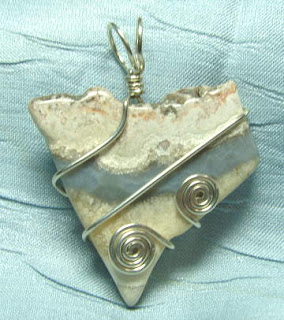 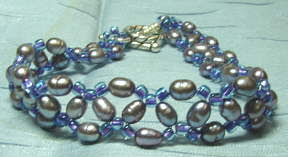 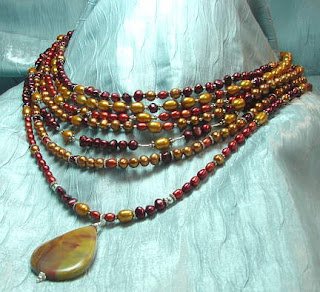 Rats. I have really good ideas for this week's theme: Chinese Culture. Unfortunately I don't have any spare time, and I refuse to get behind on the weeks. So instead here is a piece I made 3 weeks ago, but has great meaning to me. I've named it "South Dakota" partly due to the color scheme.. it really reminds me of the painted canyons we saw last summer on our South Dakota trip.. and partly because I was with my very good friends ( Hi Cathie! Hi Sue! ) from South Dakota when I bought the beads. I could just as well call it " best friends" because that is their company name and well, recent life events make me realize just how important good friends can be.

Periodically I get together with Cathie and Sue to bond and bead for a weekend. We got together in Omaha in early April, at a bead show and Sue bought these 4 different colors of pearls. She didn't buy them with any peculiar plan in mind, but I was looking through her goodie bag and realized they were drop dead gorgeous together!! Thus the plan was born.. She went back and bought another strand each, and I bought 2 strands each and we decide to have a friendly competition: both of use would make a necklace using the beads and show off our work in 3 weeks when we got together again at MageCon. This is the necklace I made. I was thinking gypsy necklace, lots of layers almost choker like, with the long strand with the pendant hanging down to the chest level. 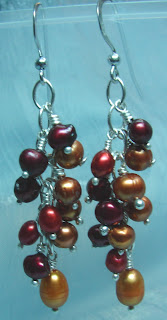 I used almost all 8 strands of pearls, lots of sterling spacers and the lovely pendant is Duck Creek Jasper.. Sue came up with a multi strand necklace also that was gorgeous, and used a honking huge crystal square as the pendant... unfortunately I don't have pictures. But we had a ton of fun!! 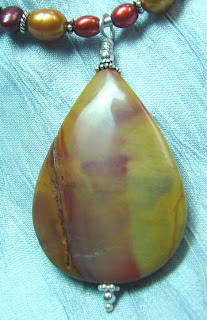 The last 2 pics are recent jewelry pieces made spirals of various sorts. I really like spirals. 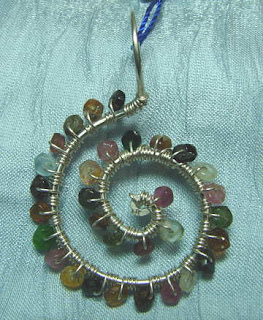 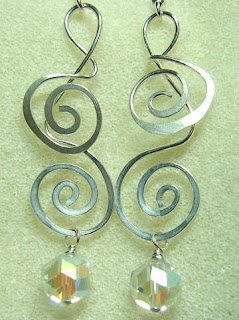 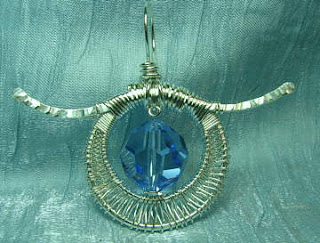 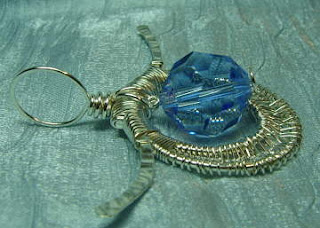 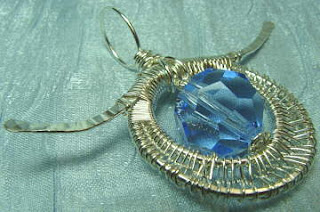 The last few astrological signs I couldn't really get into it. I'm not really sure why, maybe it's just a timing issue. I felt better about this one, and the work and details I put into it shows I think. I started out with 16GA wire as the frame, and bound it with 24Ga round and 22GA half round sterling silver. One of the stones for Taurus is Sapphire so I used a vintage large Sapphire Swarovski crystal from my stash. I wanted the crystal to have movement, which it does, but the frame isn't quite large enough to allow swinging as I envisioned. I might redo that part at some point. I'm quite pleased with the wrapping and herringbone wrapping on this piece however. I've only done a few projects with herringbone weaving, and this piece shows improvement! The "horns" is another piece of 16GA, which I hammered for texture. I think it's abstract enough to appeal to someone who isn't a Taurus, but looks enough like Taurus to make a Taurus person happy with it. Writing this I think I've figured out why I haven't really gotten into doing the astrological challenges. I'm not really in that mindset, and it's very limited market.. you can only sell to people that are into it, or people looking to buy for someone of that particular sign. Since this piece I feel is interesting in it's own right, I like it better. I love when I learn something about myself and my art.. I want it to be more inclusive of that. But it also gives me something to shoot for with the rest of the signs throughout this challenge: making them enough "like" the signs to be a sign, but interesting enough to stand on it's own also. A challenge within a challenge! I love it!! I've got a couple of picture 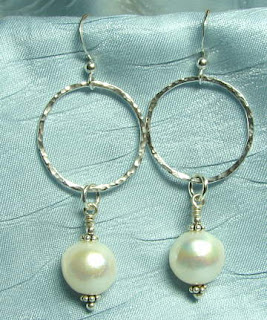 s of other recent projects.. rings which I made with sterling wire which I coiled, cut, soldered, cleaned, textured, polished and beaded, and I must say they look pretty darn good and professional! And really fun to make. 2 pairs of earrings, and a pendant I made for a friend's birthday.. I made matching earrings with smaller rings, but I guess I didn't get them photographed. 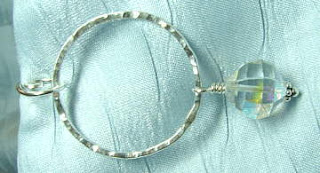 The copper circle I'm not sure what I'll do with yet.. it was practice in sawing, filing, polishing and texturing metals. It looks pretty kewl all by it's self. I even textured the back with a wire brush on my dremel, but it's very subtle and I couldn't get a good picture of it. Last is a herringbone & brickstitch bracelet with Japanese Seed Beads. 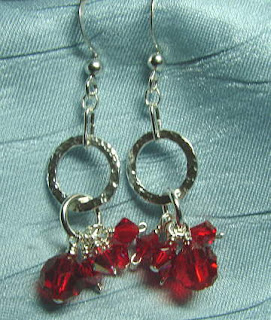 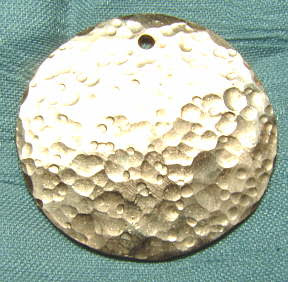 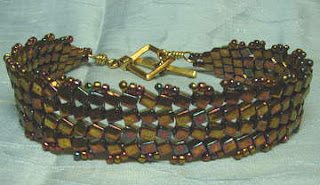