The show went really well, it was a good way to end the summer season.

I'm going to take a week (or 2) off ---- this weekend I have girl's weekend with my good buddies in South Dakota and in general recharging my batteries.


We might have something going on in October, but I don't want to jabber about something that isn't set in stone yet... and I have 1 show in November - Art on the Prairie in Perry IA which I'm very pleased to be in.

I'm really looking forward to exploring more ways to recycle old mechanical gagets into jewelry, and I want to get back to my glass -- I've hardly touch my kiln in almost a year!!  And more etching, chain-mail, etc etc etc.  Some where in all of that I suppose I might finally give the house a good cleaning... nahh!!


I'll be sharing my adventures on a regular basis on this blog like always!    So, see you in a week or 2
Posted by Kat BM at 10:19 PM No comments:


This weekend is Riverssance!  One of my favorite shows each year... and a good show to end on.  I only have 1 more show scheduled in November... I am looking at some other possibilities, but this weekend really ends my normal show season.

my version of a "bib" necklace ... done in chainmail

Tomorrow is my last East Village Sunday Bazaar ---- noon to 4pm down on Grand and 5th.

One of the groups I belong to is B'Sue's Creative Group on Facebook ( anyone can join, but it's moderated and screened, to keep the spammers at bay) Every month she runs a friendly challenge just to get creative juices flow.  Normally during the summer I can't really participate, I just don't have the time between real life, shows, work and family.

This month is Bib necklaces I realized I've actually made a couple in the last few weeks, not on purpose, but I can post them!!

These are done in chainmaile and scales.   I love how they turned out, have lots of movement and are just frankly cheerful!

My last Farmer's Market is this Saturday....... 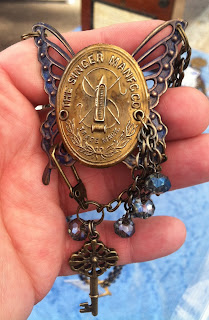 And next weekend is my last show til November....


Tomorrow My baby-girl turns 17.  I started making jewelry when I was pregnant with her.

Come out and see Jerry and I Saturday or Sunday... your last chance Des Moines!!
Posted by Kat BM at 6:04 PM No comments:


After the show yesterday, I was wiped out!! We were busy busy busy, and especially the last 2 -1/2 hours it was HOT.

Not as bad as the weekend before, but still, pretty stinky/humid/hot.

So, while I really wanted to get up in the studio and make a bunch of stuff in time for Bazaar today, I whilted after 1 pair of earrings, and I was in bed before 11pm.

For those who know me well, yes, that is rather shocking.  I must be getting old.

So of course, I wake up this morning, the first time, around 6am.

I went back to bed, and finally gave it up about 7am.

Nobody else is up yet, and so I find it irresistible to play on the Internet now that's it's really working well again.  For maybe the last month(?) it's not been working well at all, but we had a tech come out and now it's faster then it's been in years!

And it hasn't gone down yet, finger's crossed...

I actually spent a few minutes checking out my friend's facebook and ran across this on my buddy Sue's page: 30 things to stop doing to yourself

Now, while I've heard most of this before, maybe I'm just more receptive to it this morning then I've been in the past.  Maybe my gawds awful last couple of weeks is making me more introspective. (no I'm not going to explain what's wrong, it's mostly resolved now)

Regretfully, I don't really have TIME to be introspective.  I have 2 weeks left of shows, 4 shows in those 2 weeks, and I need to get inventory done.

But I'm really looking forward to having a break -- and having the time to stop and think before plunging into the next thing on the schedule, to get the house in better shape, to read a book and not feel guilty because I don't have time to read right now, to recharge my creative batteries, because I"m feeling pretty creatively drained.  Heck, I'm feeling pretty drained in general.

The sad thing about getting up at 7am today is I could have slept in... East Village Bazaar isn't til noon, and we have decided to do our "wind" set up.. it's faster to set up and actually, it will be windy today  - so if we get out of the house by 1045am, being ready for customers at noon will be no sweat.

Wonderful Day in Cedar Falls, and it now it's Sunday Bazaar in the East Village tomorrow!


OK had a fab fab day in Cedar Falls today for Artapalooza on Main !! I 've always loved this show, they are so darn friendly and nice down here.

I had one adventure I want to relate.. right at the end of the show, 2 gentlemen bought bracelets for each other.  I soooo wanted to ask if they were married, but it seem rude... but they had matching wedding rings on, or at least rings on the wedding finger that matched.. so it seems like a pretty good bet.   It makes me so happy to see same sex couples out and about enjoying themselves just like married folk should.

Iowa is so laid back and middle of the road about most things, and I think after just a couple of years with gay marriage.. I think most Iowan are OK with marriage equality now.  (Though I think more Iowans were OK with it before the ruling, see the part about about laid back...)

Anyway, it just gave me such a lift that last minute sale!!  I've always strongly supported gay marriage, gay equality -- I've just never understood why people had problems with the concept that gays are, well, people.

Anyway, tomorrow is East Village Sunday Bazaar noon to 4pm.  I need to try to whip out a few items as my inventory got hit hard today!
Posted by Kat BM at 8:31 PM No comments: