I'm almost ready for Small Business Saturday this weekend!! I'll be at my favorite local gallery, Five Monkeys, Inc  10-4, but the whole block is doing stuff for SBS all day long... you can see some of the shops and fun activities here    Here's pics of some of the new stuff I'll have on hand for the show... so come out and support your local shops, we keep your shopping fun and interesting! 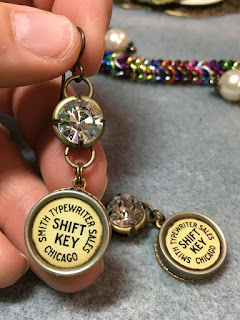 I love using typewriter parts, but I rarely use the keys.  I think it's because there are soooo many other folks doing name and saying jewelry using the keys, to the point you can buy fake keys for making said jewelry.

I'm into going where my muse leads me,  so I don't normally feel like I even want to use them.  I've made a couple of rings and I've used the odd letter key here and there as embellishments.  I have nothing against them, they just don't talk to me normally.  (And if anyone ever wants to commission something with the keys, that's fine and dandy- I have no problems with that, hint hint)   However when Jerry was chopping up a old L. C. Smith typewriter from the 1920's, I fell in love with the shift keys.  As you can see in the pictures, it has "Smith Typewriter Sales Chicago"

These keys' tell a story.  I tried to research them, but couldn't find anything conclusive. They make my imagination run wild.  Was the typewriter a special, display model to sell other typewriters?   Did a particular store get this added to the typewriters they sold for branding?  I did find an interesting ad from 1922 .

I paired the keys with large crystals that are new, but they look really vintage to me with the large bezels.  I love these, I'm tempted to keep them, but they are currently in the sales pile.  Want to see them in person? Be sure to Stop by Small Business Saturday Nov 26th starting at 10am at Five Monkey's Inc gallery!   They won't last long, that's for sure. 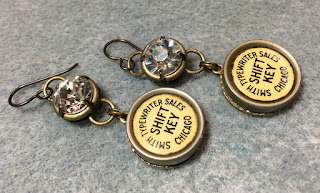 A tale of two Bracelets

I love Commissions!  Especially when the client trusts me to make something they will like.  I basically got told to make 2 leather cuffs , one for Miss Polk county 2017, and one that said "Wanderlust" and had an anchor involved.  My original thought -- stamp the letters.  After some thought, I decided to etch instead.  The lovely thing about text messages and using facebook messenger... I took photos along  the way so the clients could see the projects develop as I worked them.  It also gave them a chance to approve of the design options as I worked the process.  I thought it would be fun to share the step by step!  A huge thank you to Dina at Five Monkeys who suggested me to the clients.


I'm using this piece as my 7th day piece because I loved how this turned out, and it has a more "formal" feel than many of my pieces.  I used this great brass stamping tag in a rectangle shape.  when I looked at it it looked like to me a great vintage frame for a picture.  I instantly thought I could make like a mini-portrait using it as the base.  I ended up "drawing" outside the lines, but I still think the design works.  I have a couple more tags like this in my stash -- I feel like I still have things to say artistically about mini-portraits. 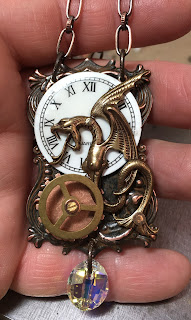 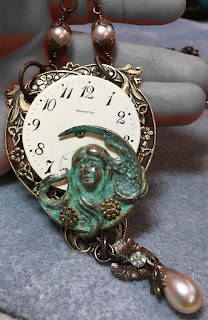 This is one of my newest pieces, I call her lady of the lake at least in my head, because of the great patina that I managed to put on her, it just makes me think of something lost in the water, then found again.  Besides, her hair is all floaty, in great art nouveau style.  What I  really like is the movement... the vintage pearl drop at the bottom has lovely swing to it, and the vintage pocket watch face has very easy movement.. you can make it twirl like a top if you hold the necklace just right.  Brass stampings, vintage jewelry bits, vintage pocket watch face, rivets and screws. 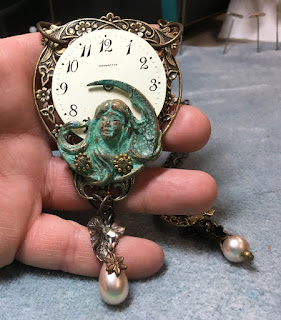 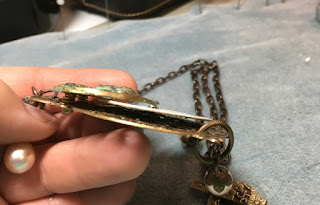 7 day jewelry challenge day 5: The pair that got away

Not surprising for a jewelry artist, I made a heck of a lot of earrings.  This pair I adore!! it's made with a retaining ring, vintage watch face and typewriter parts.  and Wings of course.  They make me think Egyptian thoughts -- they look like really stylized ankhs to me.  These were sold months ago, and I regret letting them fly away... they should have been keepers! 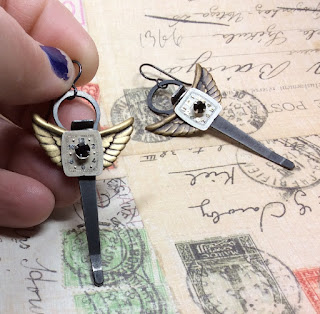 This is one of my lady Liberty Fairies.  I made 4 of them total, all had colorful fairy wings with a lady liberty, but from there all of them explored different aspects of freedom.  I used a large cog from a adding machine, watch face, clock key, and the standard tag is from a sewing machine.

This one is about breaking free from expectations, and flying free.  it's hard to see but the key has "journey" on it.  Cause art is all about the journey, not the destinations! 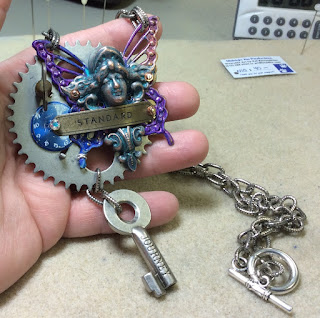 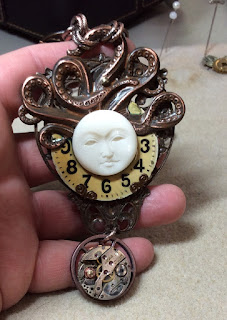 Yesterday I featured Octy as one of my favorite pieces.  Believe it or not, octy is in this piece as well... as Medusa's Hair!   The American made brass stamping got turn upside down, I pounded his poor head in so I could lay the bone face flat.  Vintage pocket watch face, and vintage watch movement and parts complete Medusa's head to toe look.  Of the many pieces I've made, this is one I seriously think of doing again... it wouldn't turn out exactly the same of course, but I just love the hair-do, and I've looked for faces for a Medusa II but I've not been happy with any so far.  Too many of the bone faces look, I don't know.. smirky.  I love the calm look on this one.  And I really made a great steampunky necklace to go with my Medusa.  If you want more pictures or details on her construction, you can see my original blog here.  This is the piece that finally got me over my fears of glue... while I will always look at over types of connections first, I no longer fear glue for me or my customers. 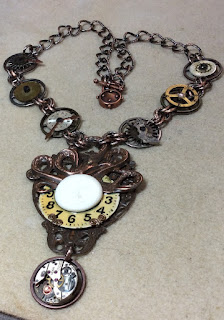 I've been nominated for the 7 day jewelry challenge by Lyn Joy Reeve.  Thanks Lyn!  It's a facebook challenge on one of the groups I belong to, and I thought it might be fun to share.  The idea is to share for 1 week a piece a day that is important to you in some fashion that you have made.  My first day was yesterday, so this post is a catch up.


Day 1 : This is one of my signature Mechanical Romance pieces, even before I had a name for my steampunk like line. I use an old key and then mostly tim holtz pieces, and a vintaj black hinge piece. I've been making versions of this for 4 years now, and each one ( I think) turns out so very different in character due to the different keys I've used. I sometimes add little bits dangling off as well. It's still a strong design and I still make them.  Most importantly, I still have fun making them.  If I can't have some fun, what's the point? 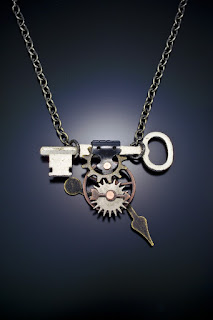 Day 2: I love Octy! This is one of my titled pieces, the official name is "Defender of the Sea".  I wrote a blog already on this guy, you can see that here.  He's currently for sale at Five Monkeys, a fab gallery here in Des Moines and I have no doubt he's gonna go to a good home soon.  But he's one of the pieces I have made that if he never sold,, I won't be sad, I'll be wearing him!  He more representative of what I Love to do... make one of a kind statement pieces!   Vintage chain, American stampings, clock parts, and part of a speedometer (the wings) 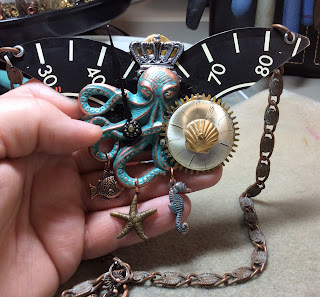