Anne's Dad is a talented guy! 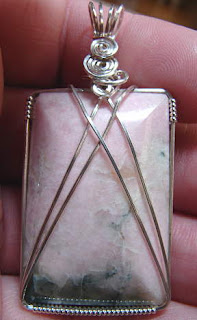 My good friend Anne Clodi's dad Bill started cutting stones just a few years ago... He was in town a couple of months ago and came to the bead meeting with examples of his work. He's getting pretty darn good! Anyway, below is 3 different pendants I made using stones he cut... which I was going to show Anne but they sold before I saw her to show her.... sooooo.... here they are Anne! I promise next time I'll make sure you see them in person before I actually sell them ok? Thanks Bill! 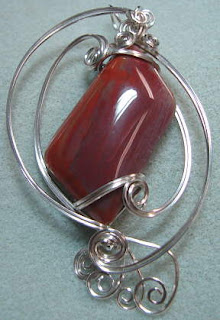 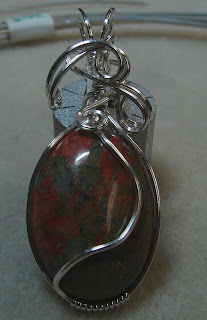 Today I've been very productive if I say so myself. I am working on several pendants and 1 bracelet... when you metalsmith, the soldering is often the easiest and quickest part of it. I spent several hours today just prepping the projects. You have to plan out your piece, cut or punch out the pieces, file and sand it, and clean it (dirty metal doesn't solder very well). You have to put flux on it ( that helps keep the metal from scorching.. and leaving streaky brown spots called fire scale) You you carefully put little tiny pieces of solder where you want them, and light the torch.. if you have done everything else correctly, the soldering is less than a minute. Stupid me, I should of thought to take pictures all along the various stages, 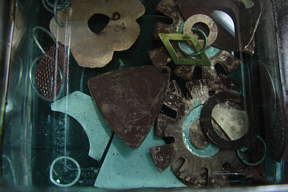 but I did take one of the items in the pickle pot... I've got 8-9 projects in pickle right now......
This is one of my little trays with a project in it.. it shows my rough sketch of what I'm doing. the open circle is of copper, the triangle is brass, and the little bits of decoration are sterling.. in fact you can see the top bits in the tray... 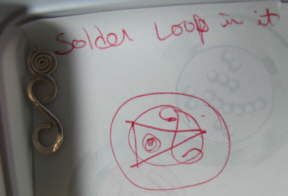 If you are soldering more than 1 or 2 items together, it pays in the long run to break up the soldering tasks. That way you can control were you want the solder to flow better.. This first past is just the circle and triangle, you can see it the pickle jar toward the bottom right corner, on top of a couple of other items. 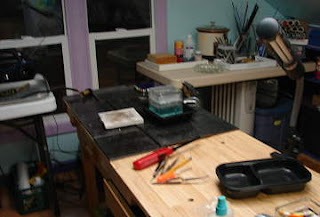 this is a picture of my wonderful bench as I set it up for soldering. The aqua colored thingie is my pickle jar. Most people heat their pickle, I don't, because the odor bothers me. It works faster heated, but I've found it works just as good to leave it in longer as heated, and no fumes. Since I rarely get more than an hour or 2 straight in the studio, I just leave it in the pickle overnight, and do the next stages another day.


Here are some cut outs for future projects and scraps. I keep all my scraps... you never know when some bit or piece will come in handy, and of course you can melt it all down and get it remilled if nothing else! 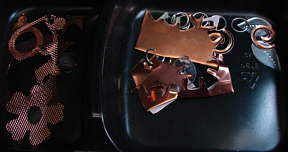 Here are 3 examples of pendants.. I actually made these a couple of months ago, and they are long gone-- all got sold at a show in the recent past. See how pretty and shiny they are? Briefly, after you solder and pickle, you rinse off with baking soda and water, you clean with soap and water, you file/sand/dremel away rough spots or bad soldering, you clean it again, then you polish them, add bail if needed, and then tumble them. this is simplified. Sometimes you have to solder additional stuff on or do "remedial soldering" if something didn't get done well the first time. Always an adventure, soldering is. 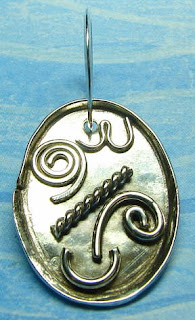 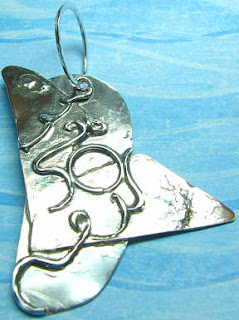 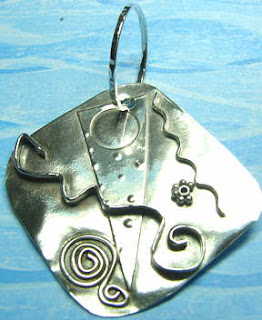 this bottom one is my favorite of the 3, I almost kept it. To the lucky customer who bought it, I hope you enjoy it for years to come!
Posted by Kat BM at 10:45 PM No comments: 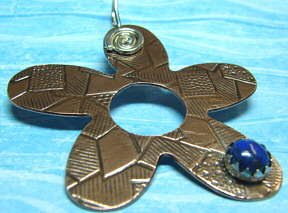 Wow! I'm done with 5 shows in the month of June, no wonder I feel so tired! Despite the weather Jerry and I had fun selling my jewelry to very sturdy hardy art buyers, as almost every show in June featured rain or sweat drenched t-shirt humidity! Got to love Iowa this time of the year! I now have a couple of weeks of break... So yesterday was sort of piddle around the house and try to catch up on projects like dish washing and bills... ugh! LOL

So today I'm going to do something I've missed the past 6 weeks... playing with a torch and metals!! I'm very pleased that almost all my metal smithing pieces have sold.. which is just the excuse I need to make more! here are 2 pieces shown, both copper with sterling accents. The flower pendant is copper that I rolled in the rolling mill to get that lovely pattern on, then cut out the flower shape, and then I soldered a small 6mm Lapis cab. The bail is one of my spiral wirewrapped one. I do this bail on quite a few of my pieces, so much that one of my regular customers commented ( in a nice way!! ) it's practically my trademark! 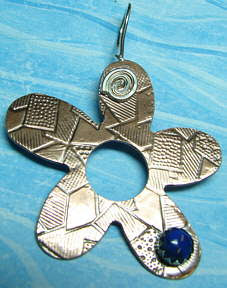 In fact, you can see the same type of bail on my 2ND pendant of today, a large tear dropped shaped copper pendant with a cut out swirl in sterling soldered on. I'm very pleased with this as soldering sterling onto copper can be challenging... it's easy to get "sloppy" with solder, and you can see it much much easier on copper... and I did a heck of a polish on this one, hard to see in the photo but it just gleams!!!!

I'll have a few more to show in the next few days, of metalwork I made before my shows... right now I'm going upstairs to work on new metalworking pendants! woooo hooo! I hope everyone has as pleasant of an afternoon!
Posted by Kat BM at 12:06 PM No comments: 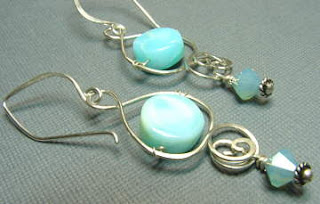 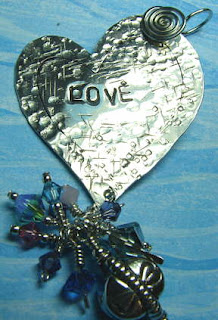 I'm getting acquainted with my new computer ( 20 inch screen, oh I am in love with that!) and I finally got my files transferred over.. so here are a couple ! Pendants are very popular this year, I've heard a bunch of customers call them "sliders" so I'm guessing that is what the popular term is for pendants this year... Anyway, as I get used to the new computer and start uploading pictures again, I'll get some of my newer stuff up! I have Farmer's Market this weekend and then I have a break from shows for a few weeks....

Got the computer yesterday, hopefully today or tomorrow we can get it set up and get it hooked to the Internet... can't wait! But until it's on the net and I have access to my pictures, no pictures to post...

Last weekend we had a show in Oskaloosa, IA and then another on Sunday in Mason City, IA. Both went fairly well, and Sunday's show had the best weather to date!

This weekend we have Snake Alley Art Fair in Burlington IA. I usually book the best price on hotels but Burlington Has a hotel with an attached waterpark... so I splurged and booked that instead. My daughter has been very good this year getting dragged to all these shows with us. She usually hides under a table and plays DS or reads or something... so a nice waterpark as a thank you seems very much the ticket! I've been doing shows for 6-7 years now, but in the past family have watched her or she's stayed at the occasional friend's house. This year we have lost the last of our babysitters, so now she's going to go to most of the shows whether she likes it or not. Dealing with a pre-teen can be trying, but really she's a good kid and I"m proud to have her as mine!

Speaking of the kid, a couple of shows ago we were right by a independent book store (The Book Worm in Omaha NE http://www.bookwormomaha.com/store/ ), so of course we had to check out books at it! Got a couple for me and Jer, but they had a wonderful Kids' section... We picked up the first 2 in a series by Michael Buckley called "The Sisters Grimm" . I'm almost done reading the first one.. and it's wonderful!! If you have an 8 and up ( especially a girl) definitely pick them up.. I think there are 7 books so far in the series. I predict that my daughter will love these!

As soon as I have Internet access on the new computer I'll get some new pics up!
Posted by Kat BM at 2:01 PM No comments:

No pictures today, my computer is dead... I've got a new one ordered but it's probably going to be a week or more before we can get it up and running and rescue data and pictures from the old one. My show in Omaha went as well as could considering the bad weather. I have Oskaloosa Ia and MacNider ( in Mason City IA) up this weekend... if you are in either area, I hope to see you there!
Posted by Kat BM at 2:27 PM No comments: 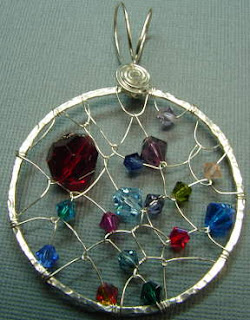 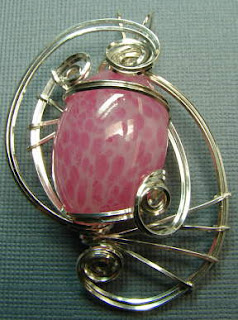 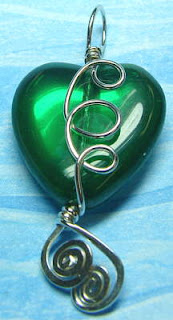 Just a quickie, getting ready for all of my June shows, here are 4 recent pendants! All done in sterling silver of various gauges, showing a range of styles. I've been doing silversmithing and have some metal pendants, I'll try to post them next time.
Enjoy! 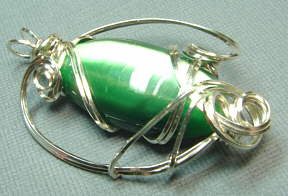