I can't help it, I just love playing with all the lovely metal bits Jerry digs out of our vintage machines.  It's like being a 6 year old, staring up at the clouds and seeing dragons.... Only I'm staring at old sewing machine parts and I see fish wrenches.

I faces in the bits and cogs and wiggle waggles he brings me.  Last year a did a whole series of faces and I'm thinking I should do that again.  I made it sort of an artistic game... I wanted to help people see the faces I see, but I could only do that by adding 1 element.  It was fun stretching my artistic sensibilities that way... I have a few pieces set aside for the 2014 version of this mini-line, but I want a few more before I make them up.

Tomorrow Jerry and I will hit the big flea market again -- I can't wait to see what we bring out this time!

I love old keys, and my stash is finally large enough to share some!

Keys are so iconic, and they can mean so many things to so many people.  And some of the older keys are little mini works of art all on their own.


I wanted to make a series of necklaces that are simple in design ( which admittedly helps keep the costs down) and fun to wear.  Most of these keys have just 1 crystal added for a touch of bling.  I made the necklaces longer -- most are around 26 inches.  Of course I am always happy to change out the size of a necklace.  Some of these keys are from the vintage lot Jerry and I picked up a few weeks ago, and then I through in a couple of really old skeleton keys and clock keys.  No 2 keys are alike, because that would be boring!  I actually want to make more of them, but I want to see how well these go over first... still, I kept a few keys out to play with, to make something more elaborate later.  It's good to have a big stash!!

Not feeling the love in the studio this week..... 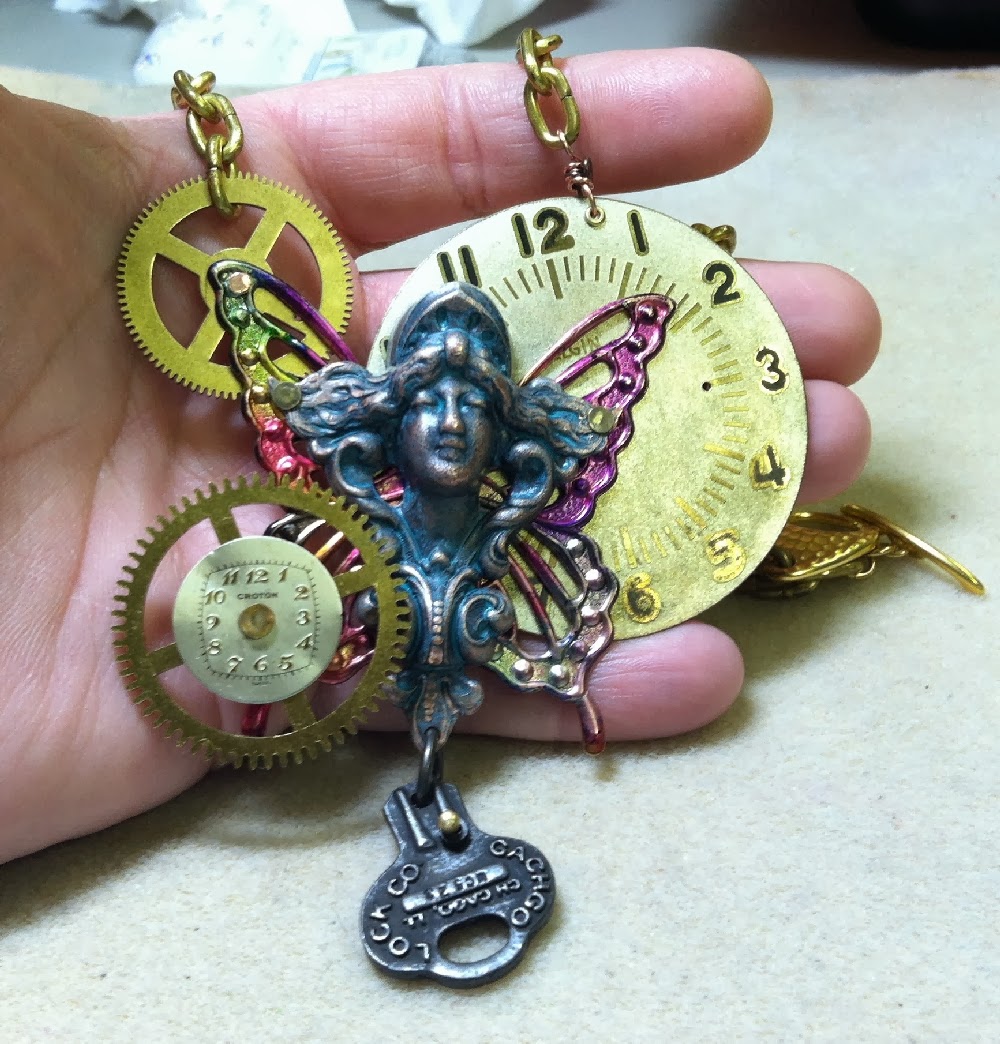 It's probably just recovering from this cold, but I"m having a hard time creating in the studio this week.  I have a bunch of paperwork type things to do.. like gathering all the tax info for my tax gal in a couple of weeks, and researching and applying to shows for the summer, so maybe it's just a hard to switch gears thing.  Since it's January ( and several months before I have a show) it's nice that hitting a minor creative dry patch isn't a huge deal.  No Pressure!  I plan tonight on organizing in the studio once I get my "home" chores done. (yes, that is code for dishes.  oy)

Since I adore organizing my stash, I am looking forward to this block of putter time.  If nothing else, my studio will be clean and organized again, always a worthy goal -- and often when I have stuff out of the boxes and playing with where it should live, it sparks ideas.

For example, the piece above came about because I was trying to put stuff away.  I hit the colored butterfly wings while I had the liberty head gal on my desk, and it was magic.   It's actually a fairy with butterfly wings, but I don't like the fairy -- never have.  I keep covering her over with different things... I'm not sure why I don't like the fairy.. I guess she doesn't look happy or something.. I like happy components.  Ms liberty is a happy camper of a component!

A few more elements added until I liked the balance and boom! I have a lovely piece, even if I didn't get everything put away yet again.  I have a whole table ( and half the day bed) with stuff that needs to be organized and put away, and I need to redo my chain storage because they won't all fit into the current boxes.

Below is one of the recycled tin pieces from the weekend before. 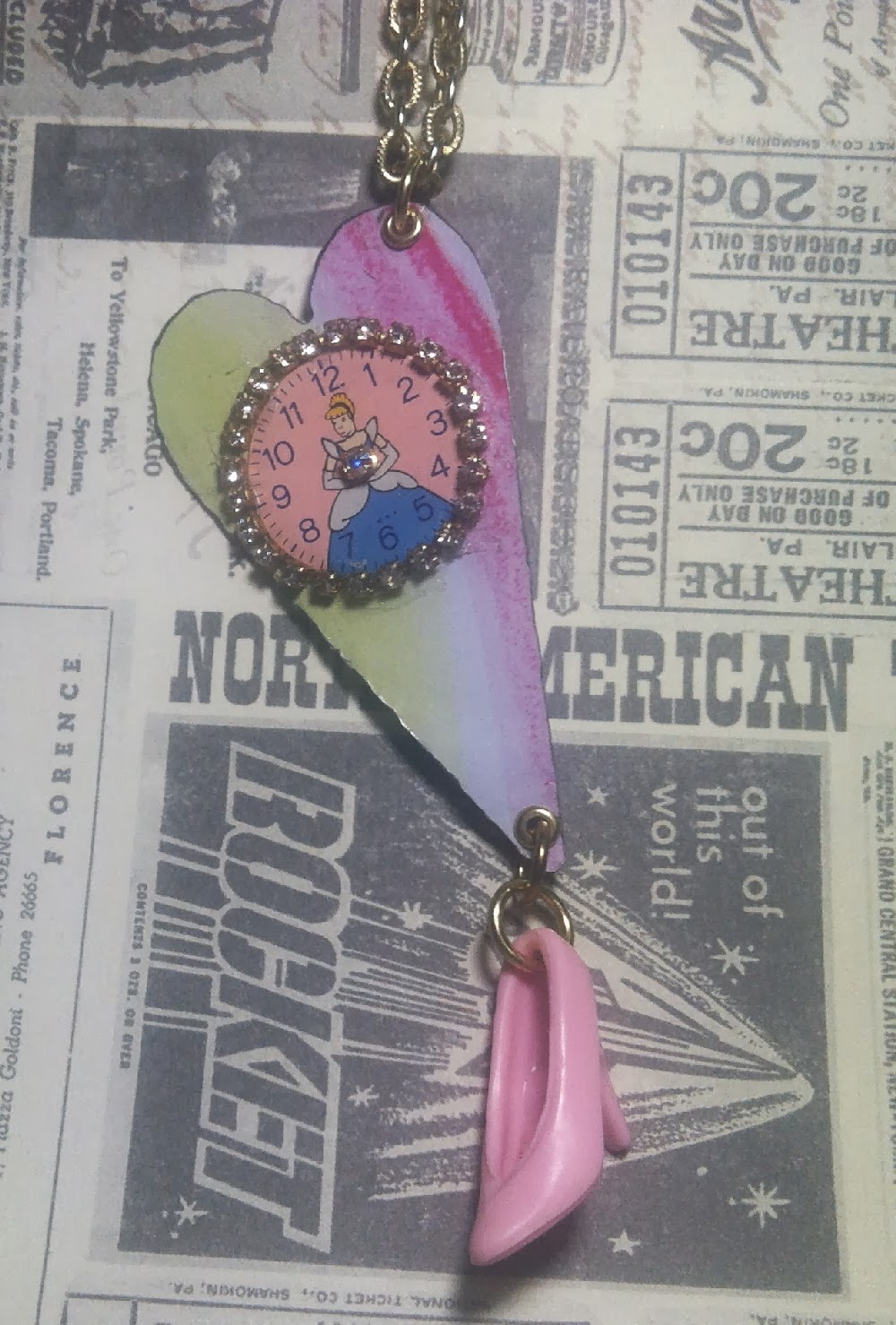 See the shoe? it's truly a barbie doll shoe, which my Mom found for me, because the woman never throws anything away, even toy shoes. ( youngest girl in the family now is 14 -- and hasn't played with Barbie in some years)

I had to have a shoe for this piece... the Cinderella is actually a vintage watch face I've had in my hoard for a year or so.  I didn't think I would ever use it because so far, I like my watch faces either "pretty" or sort of grungie and old looking.  But something about the heart shape and coloring made me think of it, and then I had to add the bling because, gosh, it's Cinderella! and then, well what else could I dangle off a Cinderella heart but a shoe??   I've mentally dubbed this "someday my prince will come, in the meanwhile I'm gonna buy shoes... "

I'm really glad Mom doesn't throw stuff away because it's much harder to find barbie shoes than it used to be.

She found 4 of them, which I took with me.  ( 2 of them even form a pair!)  (earrings anyone?) I can remember they used to sell huge shoe packs, and other accessories for Barbie but a quick look down the barbie isle at Target ( not someplace I thought I would need to ever be again) shows that they mostly sell the dolls now.  I guess there just isn't much money in little plastic bits for Barbie anymore, but as a kid that was the funnest part.

I probably have a few Barbie shoes somewhere myself, because I rarely throw away anything either.  I know somewhere in storage I have my old Barbies and the clothes my Sister Gretchie made for them.   (imagine late 70's fashion in Barbie size, but really well made... )

I doubt I have many shoes left though, because my daughter played with them as well,  and well, they are easy to lose.  Still, next time I have to dig in the closets I am keeping my eye out for them.

The thing is now I want more barbie shoes, I have in my head an idea for a cha-cha bracelet made out of Barbie sized shoes, maybe a few pearls or crystals... I can see it soooo clearly in my head.


So, anyone have Barbie shoes to spare? Pairs accepted, but not necessary...... 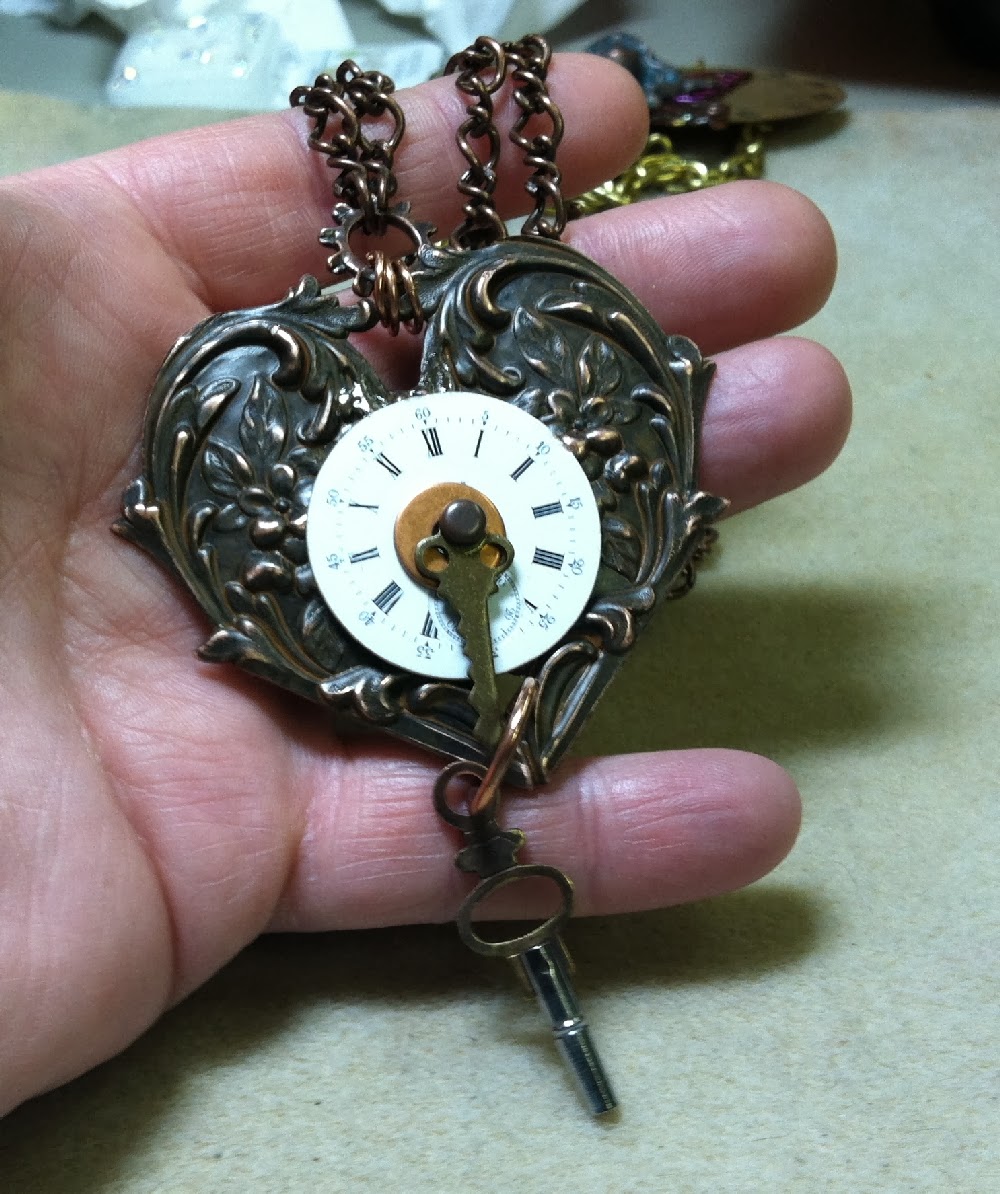 I'm not really big (personally) on heart motifs, so I tend to hide them.  I wonder if I should read more into that.

I got my tin projects all done yesterday! wooo !!!

I'll blog about them soon... tonight and the next couple of nights I really need to concentrate on end of the year business stuff, like taxes and inventory.  ugh.

I would almost rather wash dishes!!
Posted by Kat BM at 6:01 PM No comments: 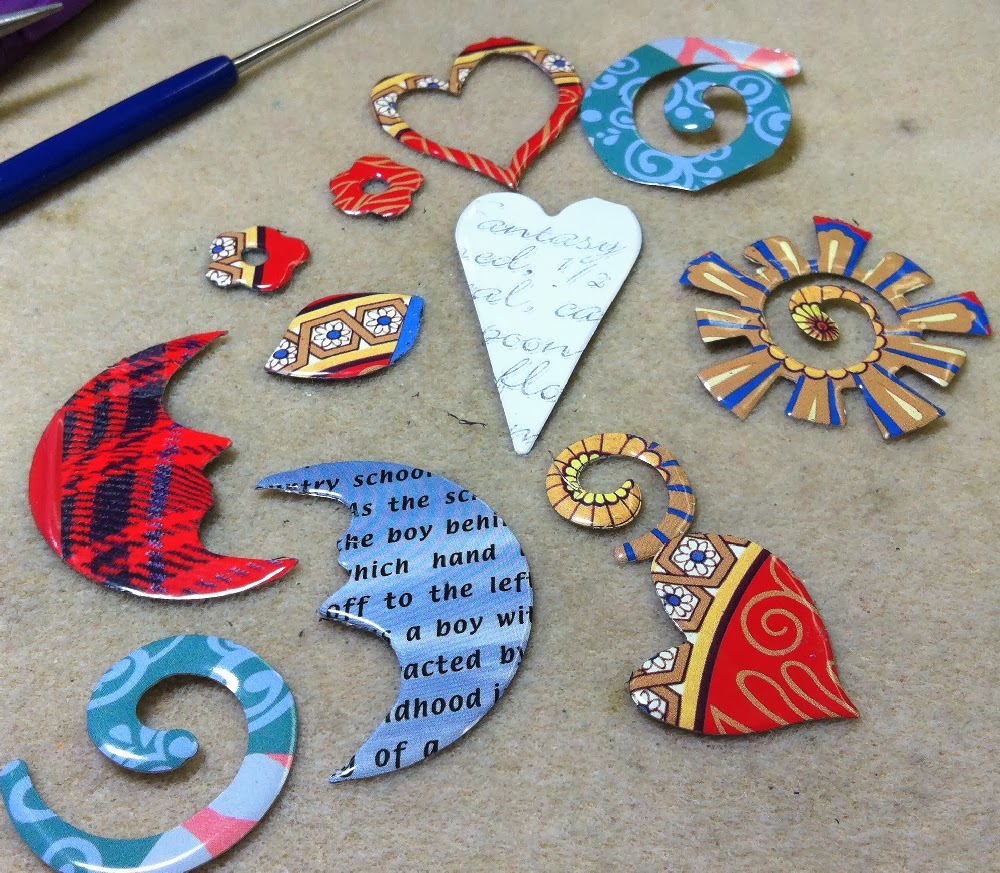 This is what I'm playing with today.... cutting up tins in kewl shapes and then making stuff with them.  I'm not sure what I'm going to end up with, but I am having fun in the process.

Jerry started college up again this Monday, so last weekend was his last homework free weekend for some time to come.  It was also the state fair grounds flea market weekend, so he suggested a round of flea Markets and antiquing.  Jesscera called her troops, and we headed out to the fair grounds and went nuts.  By the end of the day, the kid and friends escaped to the friend's house, and Jerry and I hit the flea market at the fairgrounds, 3 antique / flea markets stores, a good will and a fine jewelry store for watch movements.  I've only got pics of some of the smaller stuff.... by the end of our shopping day, we had the following items:

box of keys
3 sewing machines
2 adding machines
3 typewriters
various vintage sewing stuff, like needle packages and findings
1940's voltmeter in a awesome box
1950's film projector
little tin boxes
alarm clock
old cookie/candy tins to cut up
90 watch movements with watch faces, and these are the old quality stuff.  A couple have sterling on the faces!
and some odds and ends of stuff
I'm still sorting through stuff, and it may be awhile before Jerry has a serious block of time to salvage the big items, but boy, we had fun last weekend!!

This weekend I'm going to start cutting up cookie tins for some ideas I've gotten .... so I'm looking forward to this weekend as well. 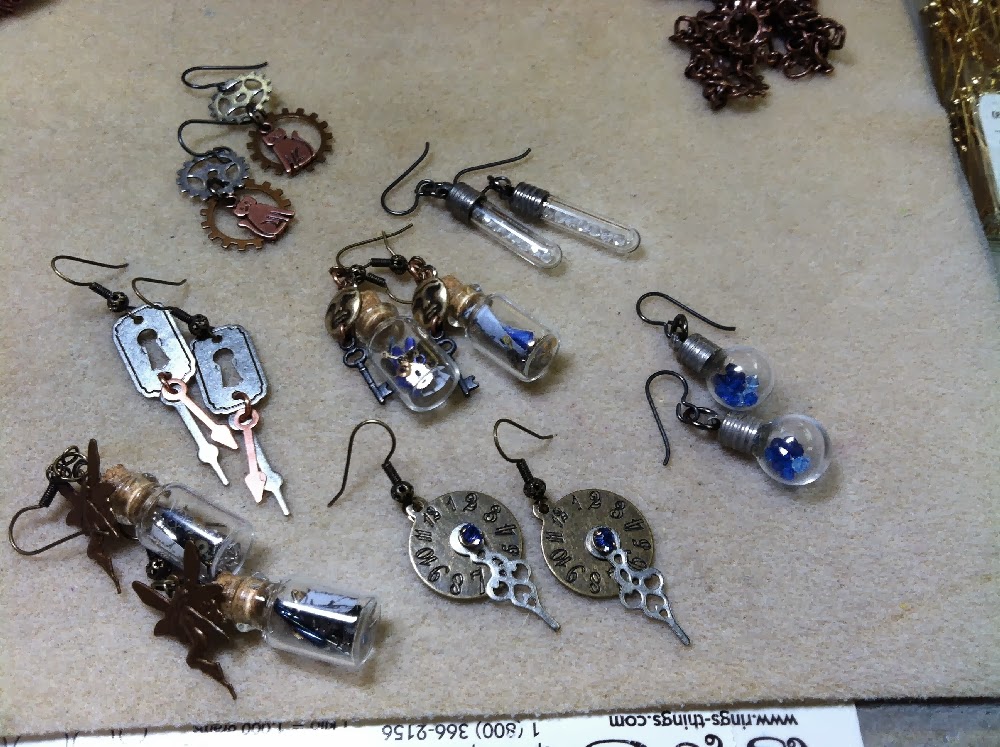 busy working on new designs for shows this year... 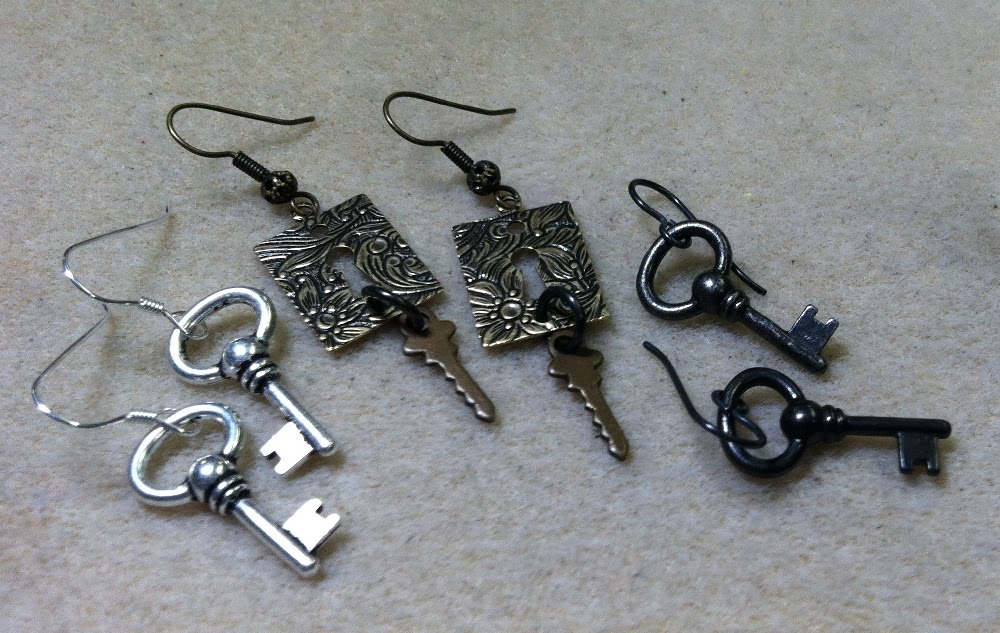 I had soooo much fun on this commission......


I am asked to do commissions by my customers from time to time, and this one was a blast!! The gal wanted her daughters to have "name" bracelets using scrabble tiles and bicycle parts, as both young women are biking enthusiasts.  I had to keep it simple because that's what the kids liked....   I ended up using bike chain that's been taken apart for the links, and bronze wire and rings.  Each tile was drilled (thanks Hubby!) and then wrapped in bronze wire.  I threaded the tiles on, then torched each end of the wire for balls, and then finished the wraps.. I wanted both sturdy construction and the orange-y/grey balled ends of the wire I think add a nice touch to the overall design.  These were Christmas gifts, so I didn't want to post this until after they received them.  I love to do projects that have so much meaning for the customer.  Everyone feels so good after something like this!!