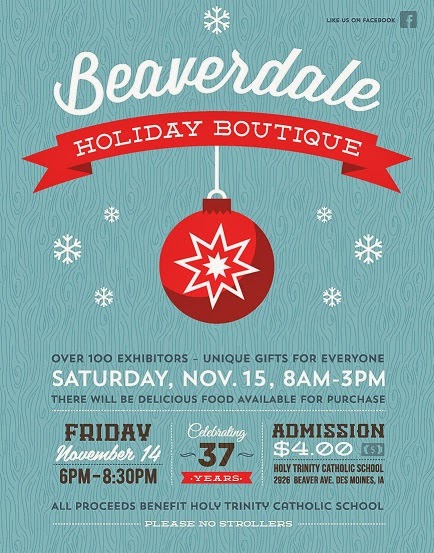 woot! Beaverdale Holiday Boutique will be back in 2 weeks...  I'm getting excited!! This weekend I have plans to make a few steampunk inspired Christmas tree ornaments... I've already got holiday-inn, White Christmas and Love Actually ready to go to help me get in that mood.

perspective and patience, a thought ramble

Last year when Walking Dead season 4 started up I was soooo bummed.  We had just dropped the satellite and  didn't have TV at all.  Now a year later and Season 5 is on, and it's OK.  Netflix has Season 4, but Jerry really doesn't have time to watch it, and I'm thinking now maybe it's just better to wait until the series ends, whenever that is, and watch it all the way though.  Last year I really really missed it, and now, I figure I'll catch it eventually, no hu-hu.  It's amazing what some distance will do for one's perspective.

I bring this up because perspective is so very important to life.  There are things going on right now, or have been going on, and If I can just step back and give it some space, I will be in a better place.  I will have patience for things to sort themselves out.

You always hear how "old folks" (whatever that means now-a-day) have that long view, and maybe I'm reaching a age where I can at least attempt that.

My personality tends to obsession, which doesn't encourage patience.  Obsessions have urgency, they are all about the now, not the maybe later...

They say with age obsessive behaviors tend to lessen, as well has folks who have depression, etc.   Behaviors don't go away, they just mellow out somewhat.

I would like mellow.. the last few weeks have been mellow.  I could get use to mellow.

I think the next time I do etched bracelets, the words perspective and patience will find themselves on one.  Calm, peace, peaceful spirit, stoic, warm, floating.

Just hanging out in the studio.....

Today is mostly about reorganizing things.  When I do shows week after week, I often pull stuff out of my nice, neat boxes and through them in bags to drag with us, just so I have something to play with at slower shows or maybe have just the thing on hand to customize something for a customer.

I've also been restocking items, and they need to be put away... and I've been buying some new stuff to play with --- some I leave out in my creative thinking piles but most will be put away.  Things that don't talk to me  ( or I have way more than I need) I'm putting in my sale pile for my destash site.

So that's what I'm doing today.  I've made a couple of bracelets, and I'm setting stuff aside for a resin day some day soon, and I plan to make rings tomorrow, or tonight, depending on where I'm at on organization project.  As I hit stuff that I want to work with, it's going in the creative piles on my back table.

So all in all, I'm having a happy, peaceful putter day in the studio.

Best of all, my desk will be clean again and I will know where all my stuff is!!!! woot! 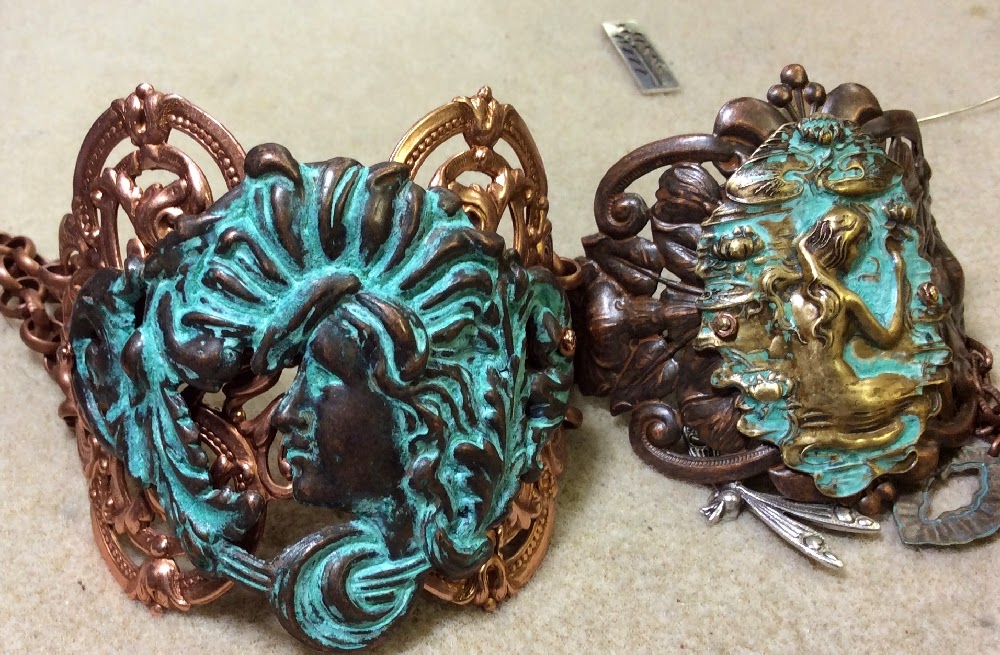 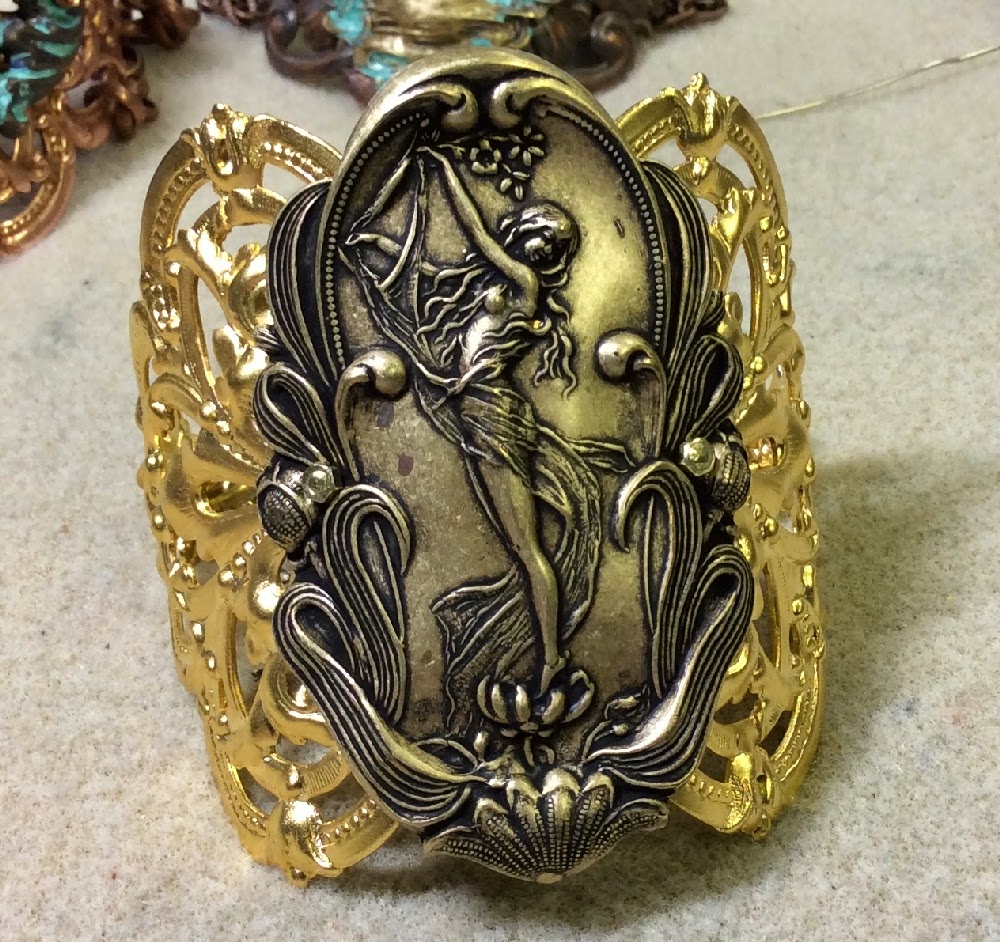 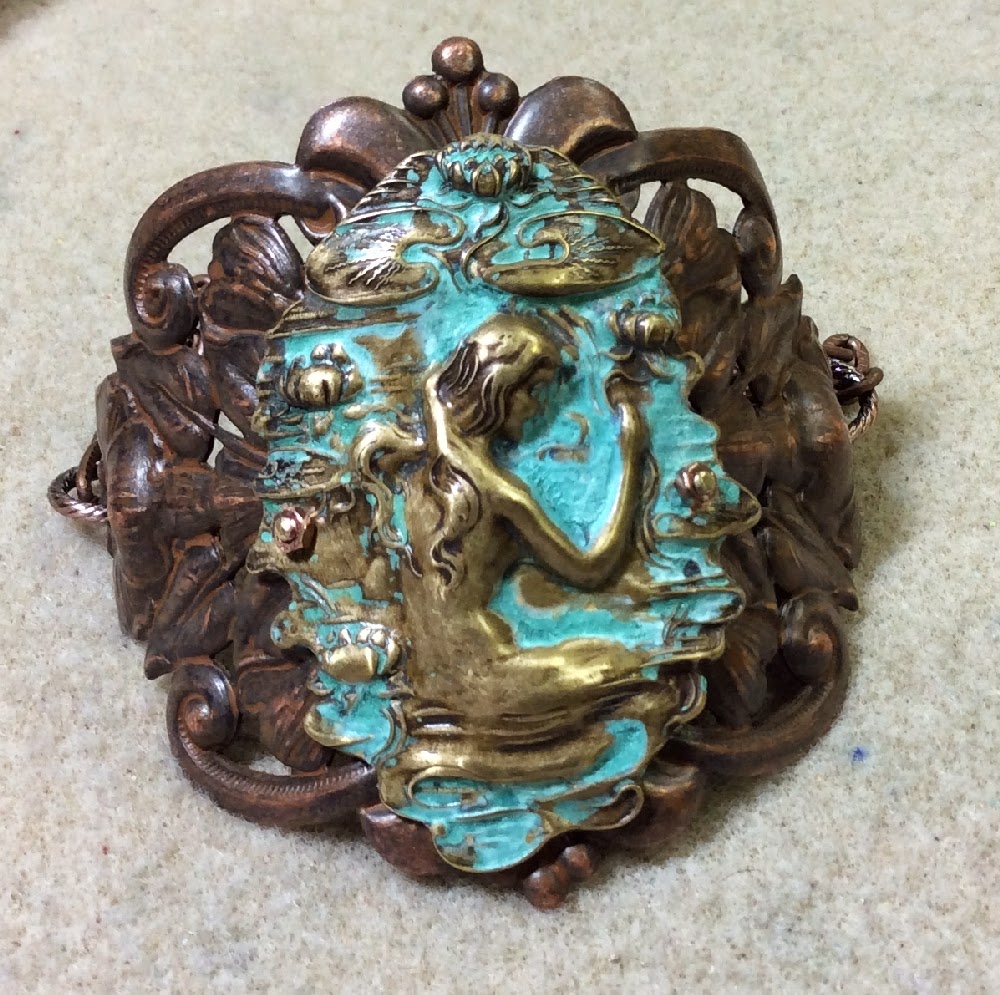 OK, I finally got all my cuffs done! I think they really turned out well.  I ended up using screw rivets on all of them, I think they are my favorite type of cold connection at this point.

For those scratching your heads, screw riveting is using little brass screws and nuts to attach pieces together.  The riveting part is once they are screwed together, I cut the screw down and then hammer the left over flat on the nut... so it's both screwed together and riveted.  I really like the finish look this gives and it's realllly secure... believe me!  I've messed them up in the past or had to remove one for some reason, and you have to cut it apart.  These suckers are not gonna fall apart that is for sure!! 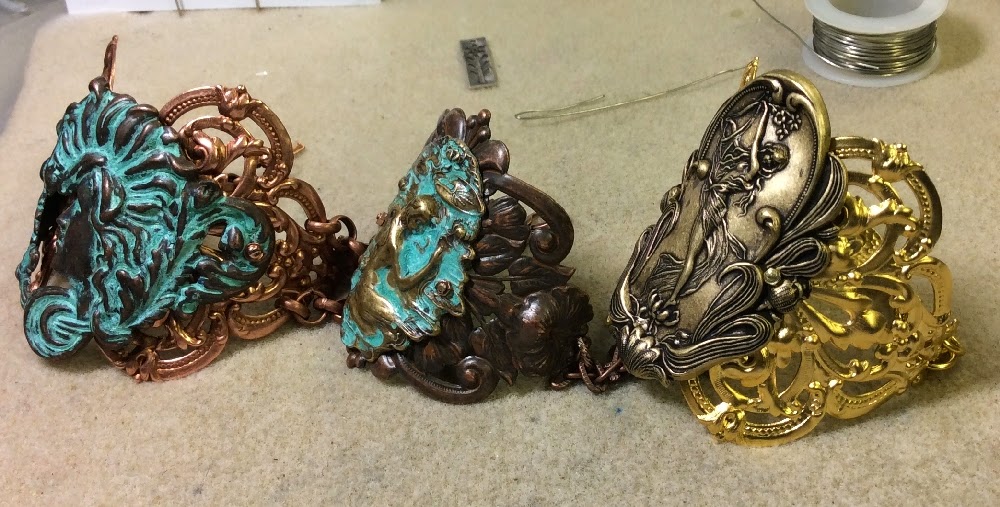 This weekend I'm trying to list like a manic on my destash site so of course I've been looking at other listings and like a complete mad woman buying up a storm!!  Our postal lady will be worn out going back and forth with packages!!!


But I'm buying stuff to play with, to spark my creative energy,  and some of it just makes me drooool and I can't wait to get them!!

I've bought quite a few lots of mixes as well.... including almost 30 pounds of vintage jewelry bits.  Now,I don't expect to find 2 much in this lot, but it's soooo cheap, I only really need to find 3-4 items to make it pay for it's self.

And I love love love the scavenger hunt of sorting through a huge box of stuff, finding that 1 or 2 pieces of treasure in the dreck!!

I'm looking forward to this weekend... my cold seems to be better, so hopefully I'm on the mend.  I'm starting to feel like working on jewelry, and this weekend I plan to spend time playing with stuff, no pressure to preform.  I am also starting to gear up etsy... I'm starting with the destash because that pile has grown alarming and threatens' to topple over on my head if I don't start to whittle it down!    After I can make a dent in that, maybe I'll start on the jewelry site as well.  I've still got some musicals to watch and pj's to wear.

OK, I'm not really going fishing, but it kind of feels like it.  I don't have another show for over a month, and then probably nothing til late April.  I have 3 commissions to work on this weekend, but other than that, I'm good to create, read a book or goof off, or even (shutter) wash dishes.

I'm probably going to be irregular on the blog for a few weeks (OK not like I have been good lately ! ) but I will post pics or tell tales as they come.

I'm really excited I can just putter in the studio, guilt free!! If I make stuff, great, if I don't, that's OK.  It's such a huge sense of relief and freedom, which will probably lead to great creativity now that the pressure is off!!

Having said that... if anyone wants something special done, or wants a home party, now would be excellent and just let me know.
Posted by Kat BM at 7:05 PM No comments:

Last Farmer's market of the year! (for me) 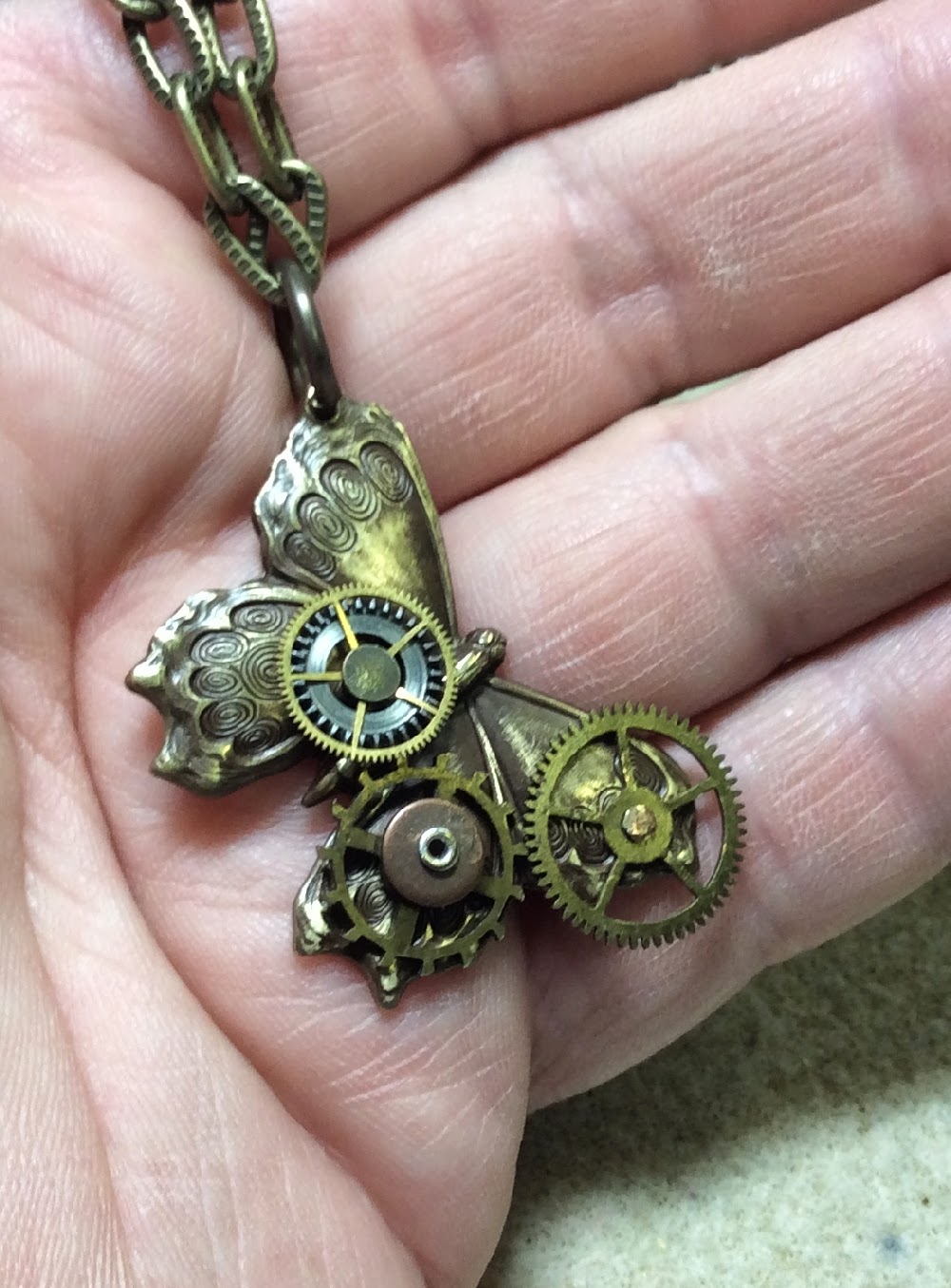 It's the last Downtown Des Moines Farmer's Market for me this Sat 8-noon.

It's the last official show for my season as well...  I will be in the Trinity show again this year, but that's all that's planned for now.  I'm looking forward to catching up on the house alittle, reading more for at least a few weeks.  I really need to recharge my batteries so I can come up amazing new designs using old recycled junk.  I can't wait!!!!

The worst part of the show grind is I can't really focus on new designs.. I don't have the time to make artistic left hand turns, I have to stay on the path or I won't have enough inventory for my shows.  I want to have the time again to make mistakes, and then take those mistakes and make them into masterpieces!!

I'm getting older and doing 20-25 shows a year all crammed in such a short time is getting harder to do.  This time every year I feel just soooo tired and worn out.

Maybe it's time to look at galleries again?

So this weekend I plan to finish Farmer's market, finish the commissions I have lined up and then I'm going to just relax for a few weeks... stock up on parts that I'm low on and just see what moves me.  Course if I get a good idea this weekend I can always work on it.. it's just soo lovely to have the choice!!