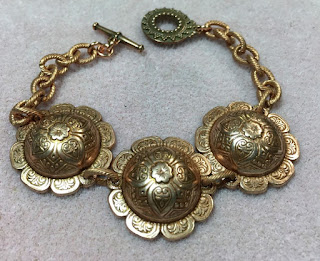 Farmer's market was truly lovely - except for the last 30 minutes when it rained cats and dogs and got everything, and I mean everything! wet wet wet.

So my studio right now has towels laid on the floor and jewelry carefully patted down with paper towels and allowed to dry some more on those towels.  I don't think anything got damaged so that's good, but I'll probably have to replace some of the tags.

Most of my displays will survive as well I believe. We did managed to pack away the vintage wood displays ( well except for my clock!) before the skies opened up and dumped on us.  Some Murphy's oil soap and the clock will be fine, probably looking better than before.

The the only real cost is the time involved making sure everything is OK - safe and dry.  I hate losing time.

See you at Farmer's Market On Saturday! 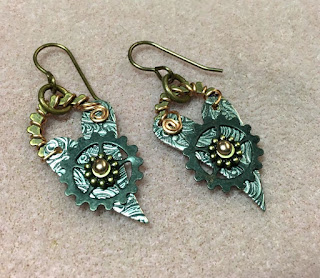 I'm so looking forward to Farmer's Market again this weekend, but then we get a nice, 2 week break.  I wish I could say the break was for a long trip or something, but instead we are getting our foundation fixed, and a few minor home repairs done.

I will still get some studio time though, and I have some thoughts...... I got this great sewing machine with gorgeous almost Art Deco type tags on it, and I'm just dreaming up designs for it.  Maybe Jerry and I will hit the big fairgrounds flea market, and of course we have a couple of family events to attend.

There never seems to be a shortage of things I need to get done around here.

So I'll leave you with these heart earrings.  I love this design, it's all new materials but I get to do such fun techniques like wire wrapping and riveting on  one project!
Posted by Kat BM at 5:27 PM No comments: 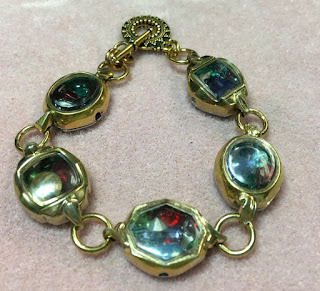 So this is a new experiment for me, using the watch cases.  I put vintage crystals in these, but I could also put tiny pictures or mementos in them as well.  What do you think? 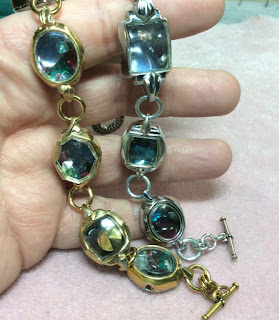 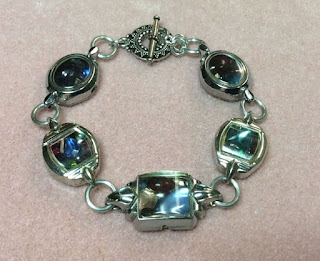 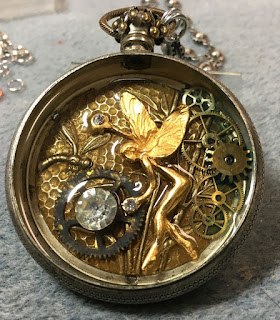 I had this out at my very first show last weekend, and it's already sold... but I am so pleased how it turned out!   This is another of my resin projects from a few weeks ago.

It's the reason I wanted to do a resin poor actually!

I got these great fairy charms on my trip last summer, but when I went to use them, I  found out why they were so affordable... it broke!! arrgh!!

but I love the design of the fairy, and it made me think of Tinkerbell.  Who doesn't love Tinkerbell?   I still wanted to use them, but how in good conscience could I if they break when you breathe on them?   That's when I decided I needed to play with Resin again.  I wanted to make a steampunk Version of Tink, so what better bezel than a old pocket watch case?

So I set up bit by bit, this design over the last several months, and worked on a few other resin projects, until I had enough to do a poor.

When I was finished with the design, the back was ugly.. I mean, beyond ugly!  So I prettied it up with this: 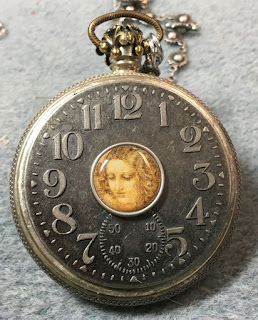 This piece attracted much attention - and Jerry is telling me I need to do more projects like this.

and will the patient live? 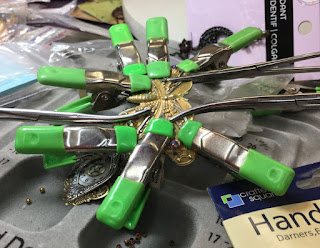 This is actually a piece a friend was working on , but I've had pieces that looked like this at some point.  The trick to gluing is PRESSURE.  Clips are awesome and belong in every studio.


Course I only glue to reinforce other types of joining, or when what I'm working with is too fragile for rivets ( which involves hammering.. think about it)  Or too small.

Still it's a valid tool in the tool-box.

Jerry and I had a FANTASTIC!!  Farmer's Market.  Next up, Beaux Arts in Davenport.  Looking forward to it, we haven't done it for a couple of years, so if the weather holds it should be another awesome show.

Time to go to the studio and create! 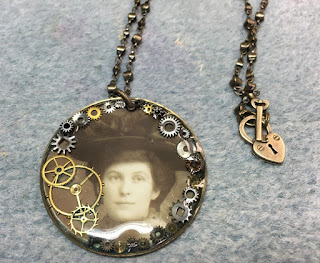 I'm soooo soooo soooo excited, this Saturday is my first show of the season, and it's a Downtown Des Moines Farmer's Market to boot!  Unless there is a last minute change, we will be right by the new Hy-Vee on 4th st, about 1/3 down the block.  Right now the forecast is Sunny and in the 50's which sounds pretty good to me... so I hope to see you downtown enjoying the first market of the year!