Taking a break for a few weeks...

look at my messy desk!

I'm taking a break from the blog for a few weeks for the holidays, so I just want to wish everyone a HAPPY X-MAS AND A MERRY NEW YEAR!!!
Posted by Kat BM at 9:46 PM No comments:

We went and visited my Great Aunt Poss today in Missouri. She's a tough old bird of 93 born this month in 1918.

Can you imagine how different life is now than it was when she was born??

I'm 43. When I think how things have changed in Poss's and Dad's lifetime, I wonder, with great anticipation, what things will be like when I"m 82 or 93.

Seriously, could flying cars be out of the question? A colony on the moon? Everything in your house controlled by a chip installed in your head? (they are working on this last one)

Think how the Internet has changed things just in 25 years.

I remember when I bought my first computer in 1993 and I discovered the Internet via AOL. Do kids my daughter's age even understand how revolutionary AOL was? It was the first mass Internet provider that made it easy for the average joe to get online.

newsnet anyone? When I first started beading/making jewelry, newsnet forums where the place to start.

When I was a kid, Atari seemed like the kewlest thing ever.. I mean playing games on the TV??

Now we have WII, but more importantly I can play games on my cell phone.. heck I can read books, surf the Internet and more with my phone and it fit's in my pants pocket!

While I look forward with delight to the future, I still love the past.

Several years ago Poss gave me a necklace that belonged to her Aunt. It's a lovely Edwardian brass pendant with chatons on it.

Now that I create pieces using brass stampings, that necklace inspires me. Heck some of the stampings I use are made using tooling from 100 years ago.

I like to add touches to brass stampings to give it a more modern vibe, yet retain that vintage flavor.

Jerry demanded I post this. So I will... and all I can say is ick!

The above picture is the stint Jerry took out this evening from his surgery last week. To be clear, he had a string coming out of his male member, and this is what it was attached to. His post op instruction was to "take a warm shower and pull"

He is deliriously happy to have this out, but oh my! it's much much larger than we thought....


Jerry has decided to keep it as a memento, possibly hanging it on the fridge as a reminder if they tell him to restrict his diet at his follow up in 5 weeks. (let me say Ick! again)

But I'll allow it if it works.. cause neither of us EVER want to go through this again!!
Posted by Kat BM at 9:52 PM No comments:

I'm taking a grand tour of my jewelry making stash, box by box. Some of the adventures I 'll be sharing here on my blog 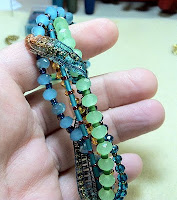 I have a love-hate relationship with bugles. I love how they can look in a piece but they are dangerous!! Unlike most other "seed beads" , they are not fire polished as one of the steps, so they can have sharp sharp edges. I tend to not use them in seed bead projects just for that reason, and I've even had them cut thin beading wire from time to time. So you need to be careful and selective in how you use them. I usually try to use them in pieces that will not be stressed as much or with stronger thread or wire. So don't be surprised while this Grand Tour started out with bugles, they became only a small part of the finished piece.

I also pulled from my fiber box, which is *small* right now. I really wanted to incorporate at least something from the box.. so I pulled out this great green/gold/brown/turquoise ribbon and just had to use it. I ended up using bugles, fiber, crystals, seed beads, and even brass stampings to make this necklace.

I'm not completely sure I like the fiber in the necklace... but I love how the earrings look!

This is shortly before Jerry's surgery on Thurs... It went super fast ( maybe 25 minutes?) and it had the best possible outcome.... the doctor got the stone ( which will be tested and hopefully future ones can be prevented once we know what kind this one is) Jerry is no longer in pain. Or at least compared to having the stone lodged, it's not painful.

for those who wondered, the book I picked was Sylvester, the wicked uncle by Georgette Heyer. It's excellent by the way.

so all the angst for nothing ( thank goodness!! ) other than to reinforce just how much I love this guy.


You all have a lovely weekend and make sure you hug and kiss your loves ones every chance you get.
Posted by Kat BM at 1:51 PM 2 comments:

I must pick the perfect book today.... 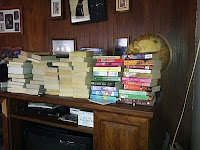 It's been a hell of a week.... had a good show, came home, got sick, hubby got sick. I got well but he's got a more serious issue, a kidney stone.

He's had one before last February. With that one he had pain during the night, finally couldn't keep still and hurt so much he woke me up and had me take him to the emergency room. I've never been so shocked.. this guy just doesn't feel pain like a normal person, so for him to be in pain enough to bring it up, let alone trot him to the emergency room??? It was down right scary, especially as we weren't sure yet what the problem was. Sure, a kidney stone was a good possibility, but if you haven't had one before, how would you know for sure??

It's beyond belief that something the size of a sesame seed can cause this kind of pain.

Several hours at the hospital ( and a morphine drip) he passed the stone. Regretfully he didn't catch it in the strainer ( if you don't know, don't ask.) The doctor stated he might have them from time to time or never have the problem again.

So this past Sunday morning at the show he woke up with back pain. It didn't take long to figure out he had another kidney stone. After a couple of hours, he felt better, so we assumed he passed the stone, just like last time.

Monday I woke up feeling crappy.. and so did Jerry. This time he vomited, and by the end of the day we were back in the emergency room for another several hours and a morphine drip. This time it didn't pass at the hospital. Damn.

They could see the stone, and advised him (again) he would probably pass it in a day or 2, but if he didn't then they recommended a urologist for further steps.

So a visit to the emergency room and to a urologist, Jerry in major pain off and on this week, and I had a virus or something, and all the normal stuff in our daily lives... this week has been fun.

He still hasn't passed the stone, so this morning he has lab work and this afternoon they will surgery remove the stone. If everything goes well, he comes home today. It's not considered a risky procedure, but all surgery has risks.

So I need to keep my mind occupied today. I need that perfect balance of a book, one that takes me away from my anxiety about my husband yet allows me to snap back to reality in an instant if need be. Something that will last 5 + hours during all of this mess. Should I reread something tried and true, or something unread before, but by a reliable author? Take a chance on something completely new?(you would not believe the books on the "to be read" pile on our TV right now.. so I took the picture as proof)

Cause I need to shut off my brain. I have a creative mind, it insists on running through all the possible permutations of today, when all I want to think of is fast, easy and completely successful surgery. And a speedy, complication free recovery. Or I don't want to think at all.

I think I'll take extra books just in case the first one doesn't work.
Posted by Kat BM at 7:58 AM No comments: 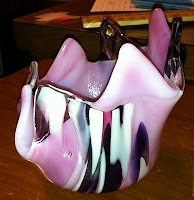 in Iowa City this weekend went pretty well considering the economy, half of the show was jewelry ( though I'm pleased to report only 1 was most certainly buy/sell .... most of the jewelry was just out of this world) and always not fun unload /load up at this building. ( 100 odd artists and only maybe 10-12 "official" loading spaces)

We had a group shop lifting today around 230pm or so, they got us for 1 bracelet, 2 pendants and 1 pair of earrings.

I'm never happy when things walk out of the booth without getting paid, but it is just part of the business. Most of the time, after almost 15 years of doing this, you just shrug and move on. I think overall I've been lucky, as it really doesn't happen that much.. I will say it seems to happen more in winter shows.. I don't know if this is how some folks shop for Christmas or if it's something about being inside instead of outside, or if being crammed into a small space we just can't watch as well.

I really hate shoplifting, but at least this time they didn't take any of my "best" pieces. You always have pieces that mean more to you, are like little pieces of your soul. It's hard to be all "professionally" detached like I am today when it is something you really put your heart into. I mean I love everything I make, but realistically some pieces mean more.

Right now it's probably the etched pieces I'm making that would hurt me the most if they walked away. I like some of the new cuffs so much I almost didn't put them out for sale!

Speaking of love... now that I'm done with shows for at least a couple of months, now I can really devote time to playing with glass again. I made this bowl last weekend, it's kind of quirky but I like it.. I hope to make another this weekend. I also want to make more fused cabs, and play with glass clay. I've got a bunch of ideas ... and without shows on the horizon I can afford to have some play time! 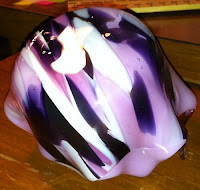 my new bowl upside down
Posted by Kat BM at 8:08 PM No comments: