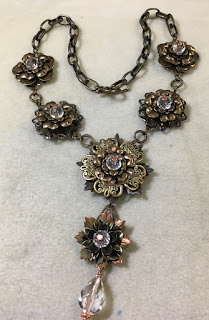 Taking a break on the blog for at least this week, I wish everyone a fantastic, family but not strife filled thanksgiving!

We lost one of the best kitties ever this weekend, Jupiter, Jumpin' Jupiter, Old Man, My Good Guy, Jup-ie, Jup, and my bigboy... all the names I called him.

He was pretty mellow as a cat, at least in contrast to the other nut jobs we have right now.  When healthy, Jupiter weighted 18 or more pounds, and he wasn't fat.. he just was a big, well proportioned cat.   He had the longer head/nose like a Egyptian statue, I always loved that.  he adored being held, he loved tummy rubs, and basically being pet everywhere and anywhere.  When he was about 3 years old, we had a bat in the house.. he jumped up and caught it-- then dropped it.  I think he was as surprised as we where he jumped up 7 feet to catch the damn thing.  He was smart too.. the only cat in the household that could open some of the doors.  (thank goodness!!! )   He had the best meow I have ever heard, and he had a large variety of them.  He would talk to you.  His purr could shake the floorboards.

I could go on and on, but it still makes me cry to think about him too much.  I just try to keep in mind he had a good, long life, 17-1/2 years is a pretty good run.  He was doing OK until just the last couple of months, he really seemed to slow down but didn't seem to be in any pain or anything.  He just didn't move as much, and when he did he moved slower.   Since he was 17 years old, we just though age was finally catching up to him.   (his sister Jezzibel is much slower than she used to be as well)

Friday he started to act like he didn't feel well, and he had sores in his mouth.  He refused to eat - by Saturday afternoon he refused to drink water.  Sunday we took him into the vet, and they said it was probably renal failure.. and there really wasn't much they could do at his age and stage of condition.

So we made the decision to put him to sleep.  It's always one of the hardest things you have to do in this life, make a decision about one of your best buddies... but it comes down to quality of life and length of life... and dignity.


Rest in peace my big boy. 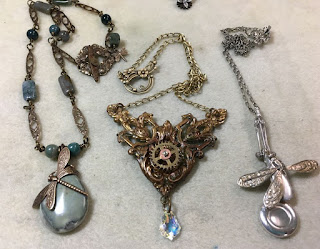 OK, I'm trying to catch up on all the photos I've taken during the season as I make things, so this post I'm showing you 3 necklaces I made just in the last month...

Now Jerry gets little grumpy at me when I make stuff that isn't in my main lines, but sometimes I just need to make something that talks to me.  I was digging out a few jasper beads to make dangles on a bracelet... and ran across this silver leaf jasper teardrop stone pendant... and I just had to make something!!! Seriously!! I haven't touched my semi-precious stone collection in ages, and this poor, beautiful teardrop cried out to me!!!!

so I found a few more stone beads in various types of jasper, and came up with this fantastic necklace with brass dragonfly. 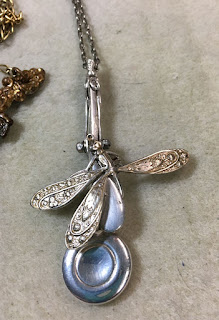 Yet another dragonfly, but this is attached artfully to a flute key.  This is available at Five Monkeys Inc Gallery  and I have one pair left of matching flute earrings. 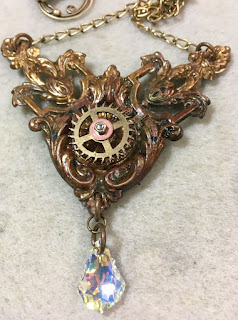 I adore this one, and it's super light !  It's part of a vintage drawer decoration, I bought it some time ago at a flea market in a mix box of door and drawers brass bits.  The patina is fantastic, but it's so thin and light that I put some resin on the backside to make it sturdier.  I added a vintage clock gear and a lovely drop crystal.  The piece is just fantastically detailed.  This is available at Five Monkeys Inc Gallery
Posted by Kat BM at 8:12 PM No comments: 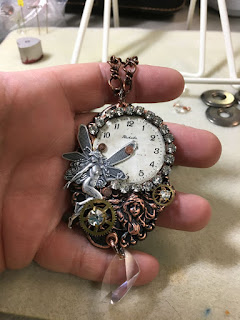 I wish I could spin some pithy interesting story for my 1000th blog but honestly it kind of snuck up on me and I really don't have any interesting ruminations to share on this mile-stone.  So instead I'll share this picture of a piece that's already sold, even though I only made it in September.

I love the extra face in this one.  I designed it for the fairy and the watch face and gears, but when I laid it all out there was this empty spot.  I thought about putting another gear or face in but it didn't look good to me.  I finally added the copper Art Nouveau  lady and it popped!!

So wish me happy 1000th blog post.  This weekend I'm sorting several lbs of brass findings/stampings.  (my pretttties! my prettties! )   I'm just not into making anything today.. but I've sketched out a few ideas while I"m playing around my piles of brass bits.
Posted by Kat BM at 7:10 PM 1 comment:

I'm featured artist at the Gallery!!!!!

I'm so happy to get my jewelry set up in the place of pride at Five Monkeys, Inc Gallery here in town!  I'm to be featured artist both November and December, so not only is my display huge right now, I'll be in close touch with Dina, our wonderful Gallery Mistress and keep it stocked at all times. 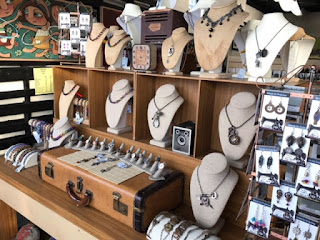 and in the store side : 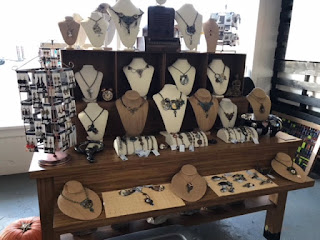 and here are some close ups: 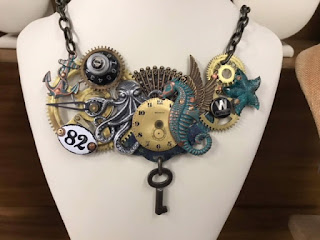 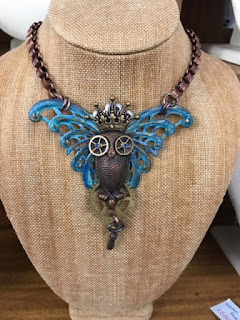 King of the World! 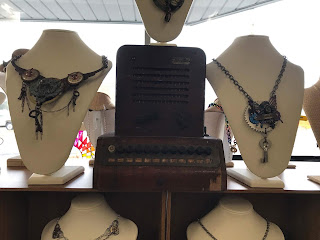 On the top shelf is our lovely 1940's radio with great necklaces ! 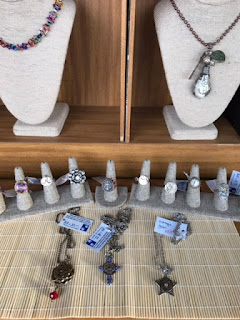 Window side you have chainmaile and rings and more necklaces and such...

I think the display turned out great.... you need to see it in person, as well as all the other great art Five Monkey has, all of it by Iowa Artists, many of them local to the Des Moines Area.

and you can check out the vintage record store as well all at one great location at 4211 Chamberlain Ave in Des Moines, across the street from the shops at Roosevelt.
Posted by Kat BM at 6:56 PM 1 comment: