Monkey Business is finished, sold and paid for! 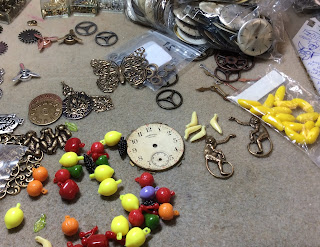 You might remember last month I was working with monkeys.  You can see a peek of what I was working with - I was going to incorporate bananas into it but I couldn't get them to work like I wanted, especially since the monkeys I had are the no evils ones.  It seemed too much you know? 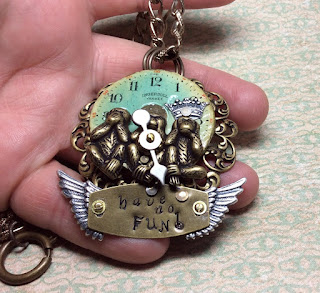 Here's how they look finished... this one already has a home.  I love how the vintage paper pocket watch face turned greenish.. I think the resin interacted with the patina on the back of the watch face which is brass.

I had to make earrings of course!! 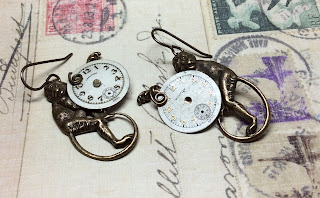 this is what my desk looks like right now 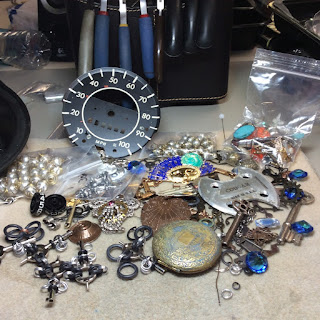 I've reached the point where I cannot create.. my damn desk it 2 messy and I can't seem to focus on anything one project.  So tonight my goal is simple: clean my studio! clear my desk!! group these items into smaller piles that make sense!  Leave just 1 project on my desk and work on it.  If I hit a block, then I'll put that project away and tackle another.

if nothing else my room will be clean right?? 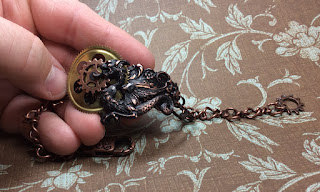 This little cutie is a brass stamping bracelet with vintage clock gear.... this is an older pic, this past week was so very warm in the studio it was hard to make stuff.  New pics of the new stuff coming soon!
Posted by Kat BM at 6:31 PM No comments:

what's on my table? Sales tax!

My picture today is pretty bracelet, but I doubt I'll make more than the 2 I made.  weaving the wire between the links just so so -- painful!

This design is brought to mind because of the frustration level it entails... just like paying my quarterly sales tax!   OK I'm whining, paying quarterly sales tax in Iowa isn't bad ( don't get me started on other state's though) it's just I"m in the mood to make, have been all week and everything seems to conspire to keep me out of the studio.

Who wants to pay sales tax, wash dishes, be sick etc etc etc...  when you can work on jewelry!!!!

OK, I'll quit whining now... I hope everyone has a fun and relaxing rest of the week.. which I will if I ever make it back up to the studio!
Posted by Kat BM at 6:01 PM No comments: 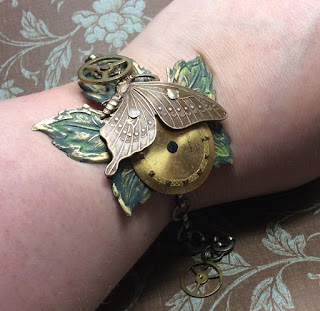 Vintage watch face, vintage clock gear, riveted on hand painted brass leaf .  I know, I should natter on some subject or another... but i'm in shopping mode.. looking for more vintage sparklies to work on my new line of vintage jewelry paired with vintage clock parts.  whee! I'll blog about it soon....
Posted by Kat BM at 5:27 PM No comments: 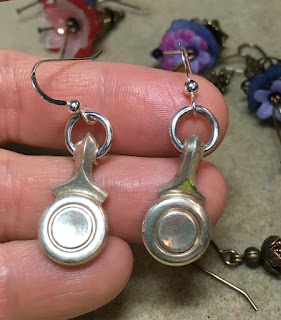 This Sat we will again be out on 4th street, south side about 1/2 way down ( same spot as last time -- in front of the back corner of Dos Rios).  I've been on an earring kick ... the top pair is made from a old beat up and unrepairable flute!   Bottom pair various washers, some vintage.    I promise more words next time, still working on some commissions and new stuff for this week! 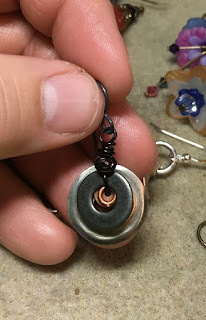 One last note on my trip - when we have time we always investigate shopping opportunities for our special interests. This means board games, books, manga, antiques, and for me of course, beads / jewelry supplies.

To be honest the last few years bead stores haven't had the allure they used to hold for me. I just don't use basic beads that much anymore. I still love them, I still adore them and will protect my stash (hoard) with my dying breath, but I really don't need to buy them at this point.  So when I buy at a retail store it's probably a very special one of a kind piece or a time-sensitive purchase. Or it's my desire to support bead shops in general. Even if I don't buy much local stores are important and deserve business's when I can swing it their way.   Shop local folks!!

That said, Denver is a huge city, so I wasn't going to pass up my chance at a bead store - the chances of finding a good one that might have stuff I could actually use ( read that as brass stampings, misc metal findings) was higher.  I researched it thoroughly the night before because we only had time for 1 shop before zipline-ing.   I finally picked Ornamental Beads  (the website doesn't do it justice!! ) because it had great ratings online and the reviews talked about how broad the stock was.  She had thousands of brass stampings and vintage cabs and other lovely stuff.. I had to limit how much I spent, and she even gave me a wholesaler's discount... always appreciated.

So if you are in Denver, and have only 1 shop to go to, this is the one!

my daughter making friends wherever she goes.... 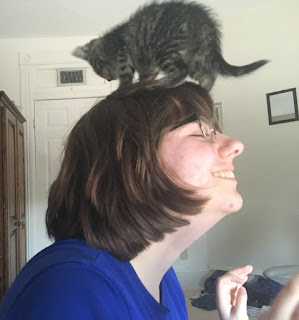 I love this picture.  Look at my baby's face, the sheer bliss on it.

The kitten isn't ours -- her boyfriend's sister got a kitten so my little bit had to check the kitten out.

So of course the kitten is on her head.

What's on my desk

So I have this customer who really really like monkeys.  I mean, really deeply adores them.
So I've been wracking my brain for monkey designs... And finally, finally!! I have a few ideas.  So that's what's on my desk today... It's not just monkey-Ing around like normal.  Heheheheheheh.
Yeah, I know, I should be ashamed, but I"m not.  Artistic license baby! 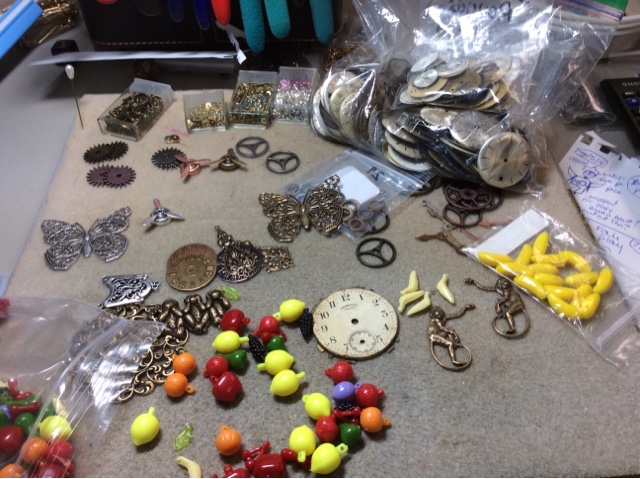 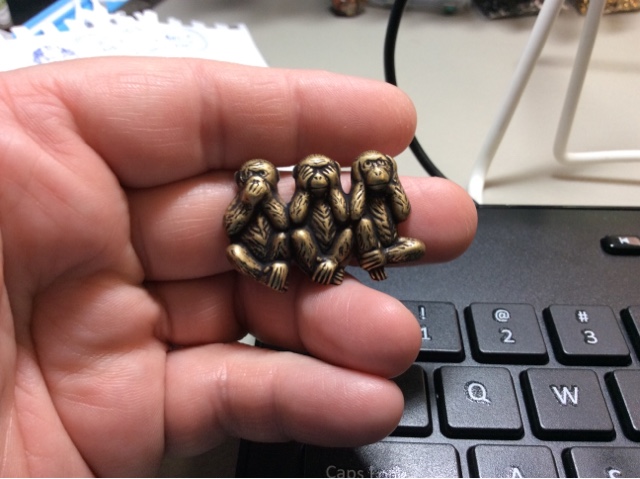 Here's just *some* of my ideas on monkeys. 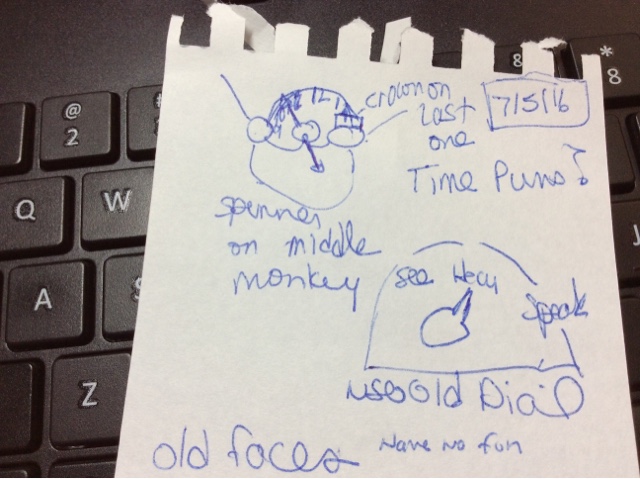 My Trip part VII: Denver and the end of the road

The Denver portion of the trip suffered from both rainy days and frankly traffic.  The Traffic in downtown Denver made all 3 of us really glad to live in Des Moines, IA.  I think the traffic was worse than Chicago!!

We did shopping (including a very kewl bead store that had thousands of brass stampings!!!! ) and Zip Lining - in the Rockies! 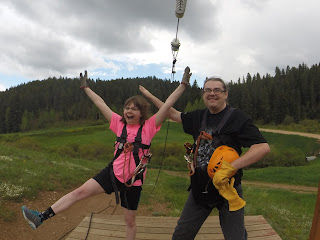 On the last day of Denver, before we started the return trip we hit the downtown Aquarium.   Denver's Aquarium is set up like a kids' museum.. this is not a complaint.. it's all very interactive and fun to keep the Kid's interest.  We happen to hit on a day they were doing snorkeling with the fishes, so Jesscera had to do that. They get them in wet suits to do it, something Jesscera had never done before.


That night we spent in Kearney Ne, and the next morning we hit the The Archway, a museum dedicated to how America expended via traveling the North Platte River over the last 150 years approximately.  It's a self guided tour - they gave you wireless headsets so you go at your own pace through the exhibits.  You start by going up an escalator into a mock up of a cover wagon and then walk through the exhibits while the headset "tunes" into each sections' story.

It's a really interesting way to put together exhibits.  if you are out in that Area it's worth the hour or so of your time.

It's built over I-80, and Jerry and I have passed under the Arch several times in the last few years, and wanted to figured it out. 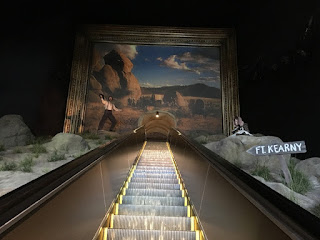 And finally, Home!   We always cheer in the car when we see the sign, cause while we enjoyed the other 9 states we traveled through, there really isn't anyplace like home -

Jerry actually has a saying about this.  Iowa -- great place to live, but you wouldn't want to visit there.  He's being tongue in cheek of course , as Iowa has lots of great sights to offer, but his point is we always want to come home to Iowa. 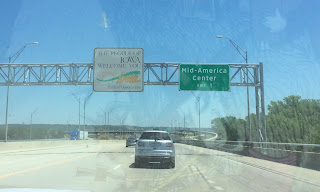 I hope you enjoyed this glimpse into 2 weeks of my life, and I'm back to jewelry with the next blog.  Everyone have a great 4th!! 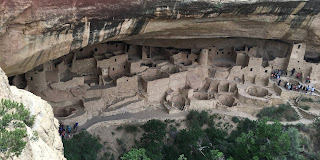 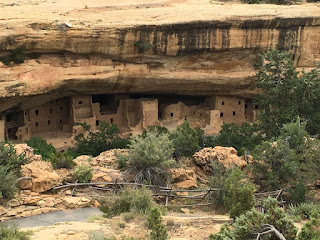 So going to visit whole cities that got left behind??

700 hundred odd years ago, whole tribes left their cities, which were built in cliffs.  They remained mostly untouched for centuries, known by the local Indians but unknown by the whites until the late 1800's.  Predictably, everyone that heard about them wanted to see them, and I shutter to think how much was lost until it became a national, and PROTECTED, park.

So today, you get to see the cliff dwellings both up close and from look outs, and here are a bunch of very kewl photos from the park

There are over 5000 archaeological sites in the park... just think about that for a minute.

I could have spent longer there, just taking it all in.  I will say it was hot and I'm sad to say, I was having a few breathing issues due to the altitude.  It bothered Jerry just a tinsy bit... Jesscera didn't seem to have any ill effects.

And we had to make it about 250 miles away to South forks for our hotel that night.  Actually we stayed in a vacation cabin in the mountains... very kewl actually.

The 12th we drove to Denver but stopped at the Great Sand Dunes National Park on the way. 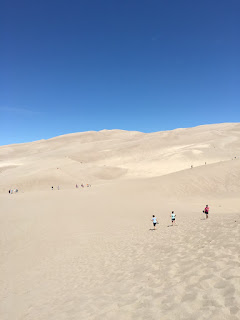 Who knew?  I think I said this alot on the trip.  Actually our good neighbor Susie told us about this one.  Colorado has an amazing diversity of land types!

We made Denver by early evening, and set up in our hotel for our 2 nights in Denver.  This was a Bed and Breakfast in Downtown Denver -- a large, beautiful Victorian house / mansion built in 1889.