I've always enjoyed this music... it's so energetic and full of vitality-- enjoyment for enjoyment's sake.  The best years were during WWII ( at least from this 60's baby's worldview)   But my Aunt Betty died this week, my Dad's last remaining sibling and I can't thing of her without thinking swing.

She was a nurse during WWII, and married a fly-boy ( well, she married 2, but her first husband died during the war).  That connection has set Aunt Betty firmly in swing mode in my brain.  I honestly don't know if she even liked swing, but living in the times she did I'm sure she did.

She was born in Waterloo Ia, but lived most of her adult life elsewhere.  For most of my life she's been in California or Arizona.  So I've only met her in person a handful of times.  Still I feel she had quite the zest of life, and boy, that's swing music.

I do have a bracelet she gave me some years ago.  She mailed it to me, and I was so ticked and frankly blown away. it's a Indian woven bracelet backed in leather.  She got it when she was a kid visiting a reservation, so it's probably 75+ year old now.   But it really must have meant something to her to hold on to it so many years.  She said her Dad bought it for her.  And she gave it to me.  That means something to me, and it's in the same treasure box I keep other mementos that are dear to me.

Aunt Betty had a temper, and her nature could be, well prickly.  I remember me and my Dad beating her and her partner at trivia pursuit.  She got hot.. but then I was being a teenager in all my glory and probably gloated just little 2 much.  Dad and Larry (Betty's hubby, who was a great guy) laughed their heads off, which probably didn't help either.

I remember her Graciousness.  Jerry and I visited her and Larry in California on our honeymoon at their house.  They were tremendously accommodating, entertaining us for the day and treating us to a very fancy Mexican restaurant.  Their house was a showplace, though strange to our Iowan eyes-- due to water rationing concerns, their garden was mostly very artistically placed rocks, hearty shrubs and tiny trees. Oh, and a few palm type trees.

I'm afraid in later years I've not had much contact with Aunt Betty... she had Alzheimer's and after Larry's death, she seems to have had more "bad" days than good.  She was in a nursing home in Arizona when she died.

Seriously, if you are gonna do a church "craft" sale, then Beaverdale Holiday Boutique is the one to do.  This is the 38th year!   Over 100 amazing vendors spread throughout the Trinity school, and best of all, the library becomes a huge bake shop.  I have to admit I adore a good bake sale... cookies and bar cookies and all kinds of treats!!

This is my last official show of the year  - and probably the last Trinity show we will do.   With Jerry a full time school teacher, it's hard for him to get time off to do a show on a weekday, and disruptive to his students.  So going forward I won't be scheduling something like this.  Heck, it's not easy for me to get the time off either!

With the huge variety of vendors, I often start my Christmas shopping at this show.  Grab some buddies, come out and shop, eat and say hi.


There is a charge to get in, $4.00, and there are drawings throughout the weekend. 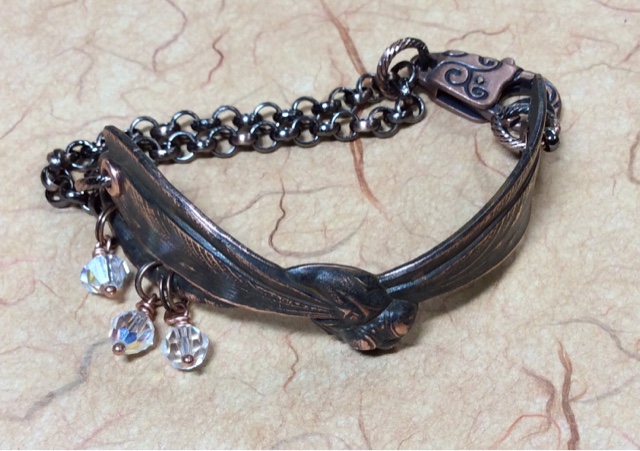 I had special guest last evening in my studio!   Turns out a very special customer's birthday was Nov 4th,  and what she wanted most was more of my jewelry in her collection.  Wow!  That's such a compliment -- how could I disappoint her?  So here are a few pics -- studio is as clean and neat


I should have gotten photos of her and her hubby, but I never think of that when people are here.... Anyway, I hope your Birthday Treat was everything you hoped for Romona!  Thanks so much for coming over. 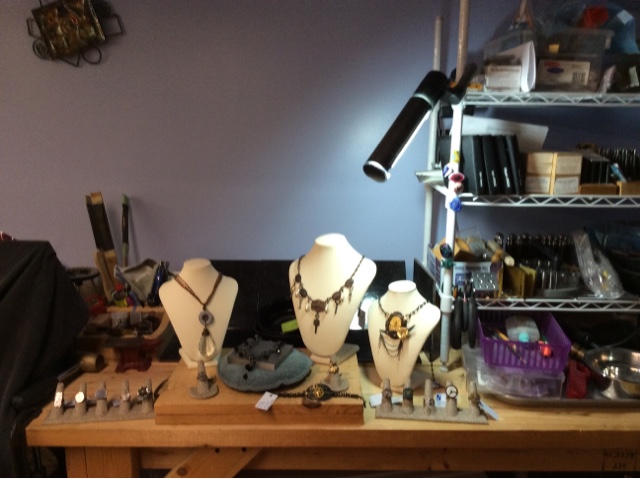 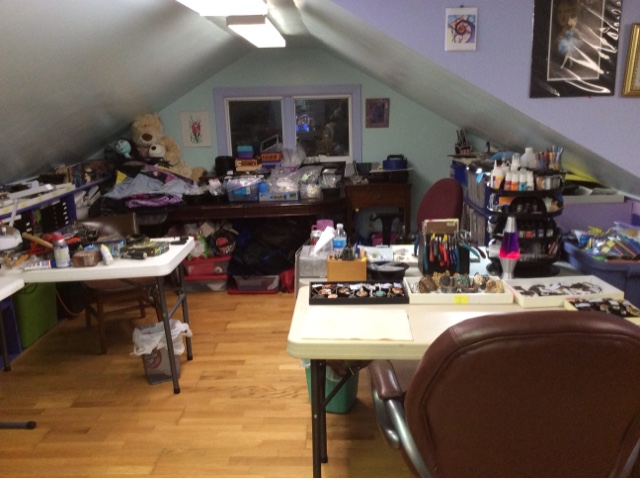 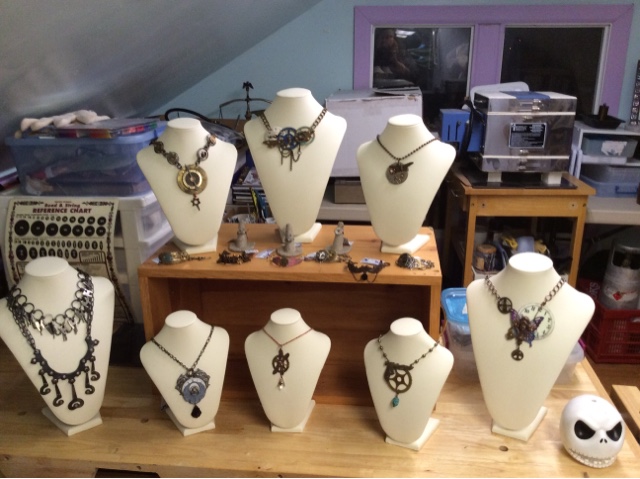 yep, I know, I need to get new pics taken.. but isn't this cute?  Old clock gear, and dragonflies and a crystals.  I even used this really cute paperclip style vintage chain on it.  I think I still have this piece actually  as it was made just before the last couple of shows in September. 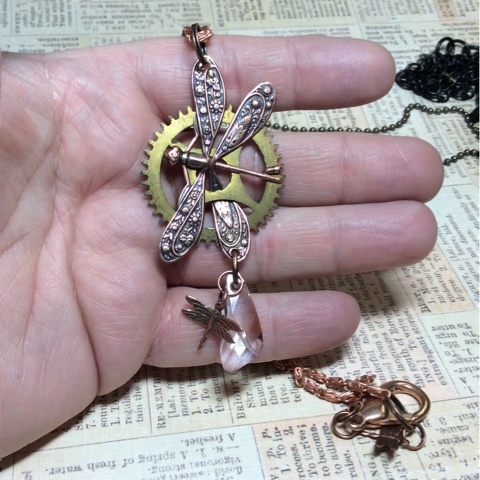 OK, this is from this summer, I'm cleaning out my old pic files and I haven't gotten around to taking pics of what I made this week so old is it.  They are long gone, but they are in the category of CLEVER.  If I'm allowed to think myself clever.  (It's been a rough week actually, so please allow me to be clever at least in my art - I need the emotional pick me up!!)

I bought earlier this year a small stash of Optometrist lenses.. you know the lenses used to check out what your eyeglass prescription should be?   These are really old ones, probably 1920's or before.  Anyway, I bought this lot of them, and a few didn't have the glass still in them, so they are just the frames.  Well I took one look at them and realized they make the kewlest instant hoop earrings ever, and what gal cannot get by without at least 1 great pair of hoops earrings?   They sold the very first show I had them at.    I made a great necklace with one and it's also long gone.  I have a few left, and I've left them in my huge play stash on my back table.. so more to come.  Just probably not hoop earrings, as I only had these without the glass.  Seriously, if I ever find more of them, with or without the lenses, I am buying them.  Then maybe I'll make me a pair of hoops! 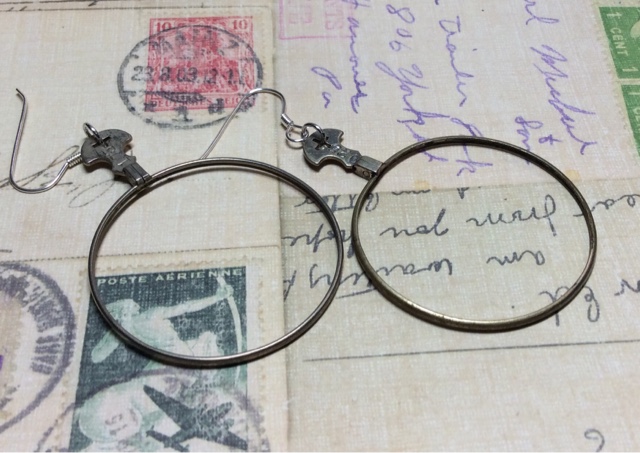