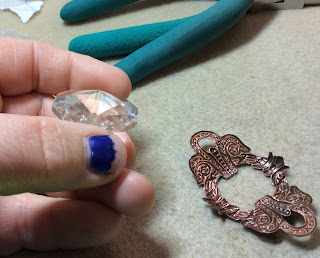 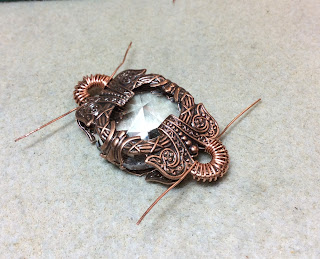 So I'm done more or less for shows for the year.  This is the time where I  get to recharge my batteries, plan new designs and pick up those projects I got stuck on and try again. See the pics of the very lovely work in progress? I started this maybe in March? but got stuck, then got busy, and it's just sitting in one of the many piles of half done somethings.  I hope I'll pick it up again at some point this winter, the vintage chandelier crystal wrapped in copper.. it's de-lish!  But then I'm not sure where it needs to go after that.  I originally thought pearls, but I don't know now.   I hate being indecisive, especially about my art!

It's also the time of year where I need to figure out my show schedule.  It's just penciling in shows I'm interested in, so I can get time off at my day job ( if needed) and start planning what pictures to send in for the jury.  I need to figure out weekends that I already know won't work ( family things) and decide if we want a family vacation or not... and plan around holidays and every one's work schedules.

Last year Jerry and I made the conscious decision to cut shows in half.  After much lively discussion, we've decided that again in 2017 to have a smaller schedule. For 2017 I'm aiming for 10-14 .  (For comparison, our biggest year was 27 shows)  So the shows I pick out to try for -- and there is no guarantee I will get in!- have to be planned out very carefully.  Just as carefully as I think about this piece.

It's possible that I won't get in to most of the shows I apply for, then I will be stuck with just a few shows for the year.  It's a horrible possibility, but very real.  You just never know with juries.  In past years I would have back up shows I could apply for later... I don't believe I'll do that.  It's so much stress trying to juggle multiple possible shows on the same date. 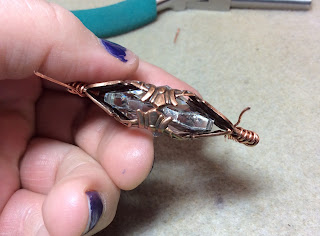 Refill at the Gallery!!


Now that the shows are done, it's time to work on the gallery... Five Monkeys, Inc .  With that in mind, I brought in bunches of new jewelry pieces, and actually doubled the number of earrings!  So welcome to my winter home guys! I'll probably do a few meet and great type events this winter at the gallery as well.

I brought in some of my kewlest pieces, including Octy !   I'm hoping to start getting new pieces made up, and as that happens some of them will find their way to the gallery as well... I'll keep you all posted!
One of the things a adore about Dina ( the Gallery Mistress) is she has art from 60 + artists.. and they are all based in IOWA!!!


So get in, buy yourself a treat and one for someone you love and do it now!! 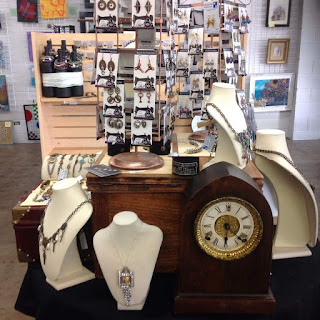 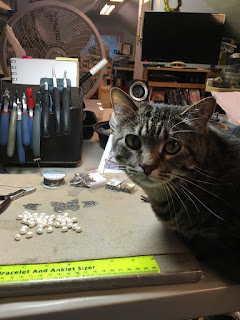 So shows are done! This coming weekend is both my Birthday and a Girls Weekend!!! woooooo!!! I'm gonna take a 2 week break from blogging / facebooking, just to recharge batteries and frankly clean my space.   So  in a couple of weeks ( give or take) I'll be back with new pics, new thoughts, and hopefully freaking awesome art!!
Posted by Kat BM at 7:15 PM No comments: