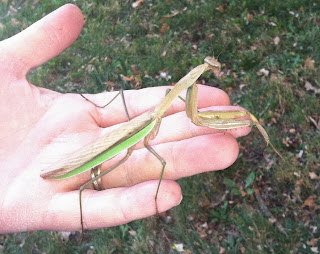 Jerry found this in our year today, I don't think I've ever seen such a large one so up close and in person!! 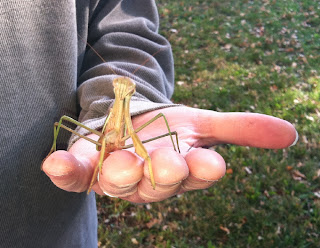 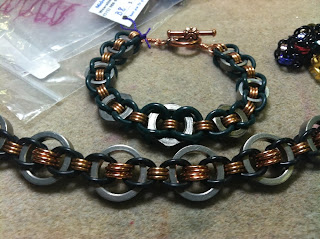 Just one today... these are great bracelets made with nuts and round bits from old cash registers, sewing machines , adding machines etc.  I love that they are uni-sex... I've had both guys and gals buy them.
Posted by Kat BM at 5:58 PM No comments:

These are gone, I'm still trying to get my picture files straighten out.  Still if you see something you like I can make something similar just for you!

I'm working on a commission today, and some fix it items for friends..  These pics, with the exception of the earrings below, are sold and and I can't make up again.  I'm trying to clean up my picture files!! But I still wanted to share these with you.

Happy Anniversary To My folks!

October 10th is my parents' wedding anniversary, and this year it's the big 6 Oh!   We kids ( all 5 of us, some spouses and grand-kids) got together this Sunday and surprised them with Supper at Big Steer in Altoona, IA, one of their favorite restaurants.  Pretty good trick, considering only 2 of us live in Des Moines!  They were really surprised and happy.  We just kept it to Family, but it's always nice to get the whole family together.

This month I turned 45.  I think I've mention once or twice on the blog that getting older isn't scary, it's a gift... I spent a bunch of my childhood in and out of the hospital, and actually stopped breathing a couple of times.  Life is good.. life is miraculous!!   I know I sometimes get bogged down in the day to day grind of life, but my birthday always reminds me how much I have to be grateful for.   (OK I could live without the chin-hair.. lol) So this year I'm sharing it all the month of October.   If you spend $30.00 or more in my etsy jewelry shop, use coupon code happy45 for 45% off your whole order.  It's my way to share .  Here are just a couple of the items in my shop, with links to that listing.  I'm putting up new items everyday. If you want to look at my whole shop, well just glance up to the tabs.. and click on the mkp jewelry on etsy link and it takes you directly to the shop.

What I will miss about TV

Now that we are truly a single income family living the 2-income life, it's time to really look hard at where our money goes and start cutting things out. First on the chopping block is our satellite service.  I will probably miss it the most; not that there are not a few shows that Jerry and little Bit will miss.  Jerry mostly watches Jon Stewart for news. Little girl likes a few network shows.  I'm working on getting a converter box or 2 so at least we will get local channels, so that fixes her up.  Jerry can probably figure out how to watch Stewart on the Internet.  Heck I can probably figure out how to watch the shows I want to watch on the Internet, but that isn't the way I want to watch TV.. I want to be able to fold laundry in the spare room while watching it, or watching it while I cook.  I like having the TV on in the background most of the time, and that just doesn't really work trying to watch on the computer.


It does occur to me that this will be the first time since I was maybe 12 that I won't have cable or satellite TV.   Maybe younger... it seems like we had cable before most of the kids on our block.. I can remember when MTV first came on cable... it was sooo kewl watching music videos when they first came out.  I just looked it up and MTV started in 1981.  OK, I feel old but not in a bad way.

Even in collage I had it.. I can't remember if I had it that one semester I lived off campus, but I doubt I watched much anyway, between a full course load, a part-time job and an internship.  I'm not sure I did much more than sleep in the apartment I shared with my good college buddy Jamie!  Still that's almost 3/4th of my life that involves having more than 5 channels.

Now saying this, other than just having it on all the time for background noise,  there is only a few shows I'm really really gonna miss.  I'm thinking I'm going to really get into music again, since I won't have the TV.  Thank goodness for I-pods!

So here is my list of whaw I'm missing them:

Project Runway.  Started watching this as a family during it's 2nd season, and I've not missed a season since.  I've watched all the spin-offs, and I even watched the crappy intimation "the Fashion show"  Tim Gunn rocks. Next Thursday is season 10 Finale, so this is one show I will definitely try to catch online.

Face off.  love love love this show.. again it's something that the whole family enjoys, though with Jerry's schedule and Jesscera's teenager-ness, I am the only one who watches it fatefully each week.

Walking Dead.  OK this one reallllly hurts.  I adore zombies even though they scare the snot out of me, so I make Jerry watch this with me every week when it's on.  It premiers 4th season this Sunday night and I will be missing it.  sigh.  I guess this one I'll have to do the DVD thingie next summer but that's a bummer.  This one I can actually talk to co-workers the next day about... or I could if we still had access to it.

Doctor Who.  I adore watching this on BBC America the same night it premiers in England, something they started to do this year.  I guess it's DVD time for the old doctor, but it's sad sad sad I'll be missing this when it starts up again for the year.

There are other shows I enjoy, but really it's those 4 that I really will miss watching when they come out.  I will survive, no doubt.  I won't even really regret it because it needs to be done... but I will miss it.