I hate being sick but I do it so well..... At least I get a pun out of my cold.  This first picture is what I wish my desk looks like--  productive!!!!
This cold is sucking all my energy - by the time I get home from work, I can hardly move.  If this follows the normal pattern I'll finally feel start to feel better tomorrow.  By Saturday I should feel pretty human again (I hope!) just in time for Downtown farmers market.  This is the last FM for the year-- we will be located near the Science Center on 4th street.  The other pics show u how some of these projects turned out.  I stil have most of these-- these pics are from 3-4 weeks ago. 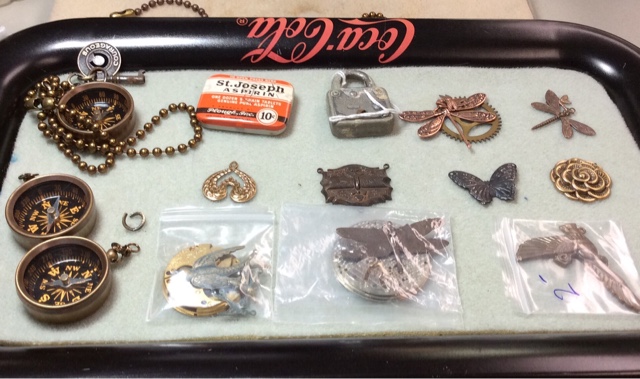 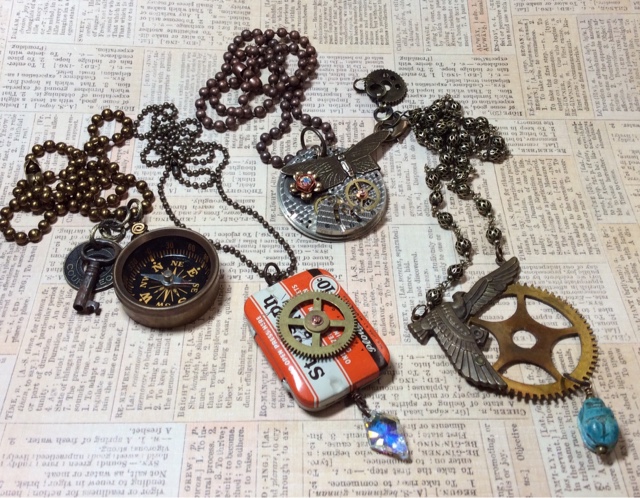 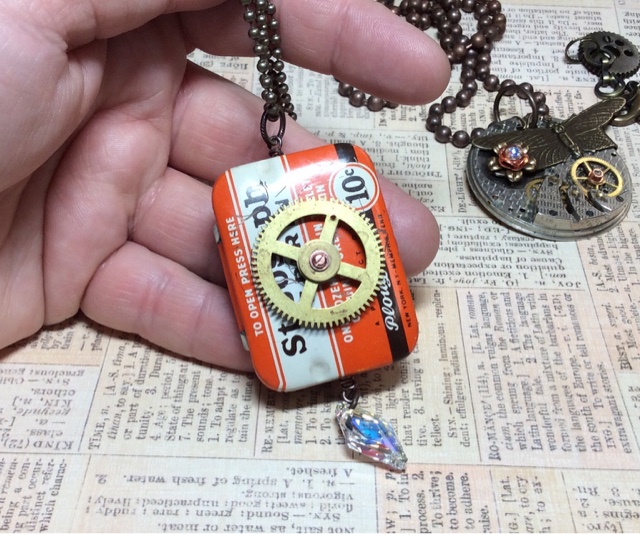 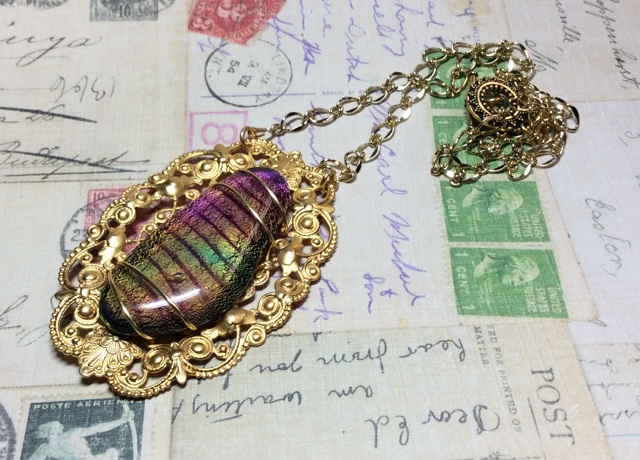 Since I'm on a roll with tag bracelets, here is a craftsman drill tag.  cute! 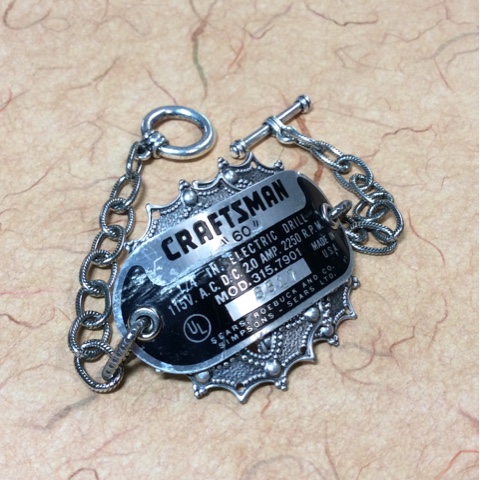 I'm having a blast on girls weekend.. so here is a quickie picture of one of my favorite tag bracelets... from a Weston Electric voltmeter.  There was a huge hole in the middle where a dial lived, so I took that opportunity to add a clock gear.  This bracelet is still available. 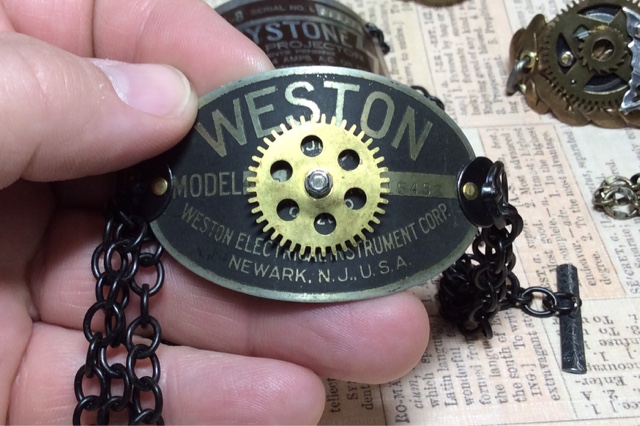 next up: Girls Weekend! wheeeee!

This will be brief.. in fact all blog entries this week will probably be brief, cause it's Girl's Weekend this week! woot!  So everyone, have a good weekend, and I'll think of you when I'm having that mango Margaretta with the gals!

Friday night in the hotel.....

Tomorrow is Riverssance, which will be awesome! The weather will be perfect, and so I'm sure will the crowds.. if you are in the Davenport Area, you should stop by for sure!

Last post I showed a pic of my worktable, and I got a question on what the cash register cog was for.  Why this lovely necklace! This is the last of the cash register cogs I have, though we have a couple of cash registers laying around ready to be salvaged whenever Jerry has time again to do so.  The crystal is a vintage chandelier crystal, and the chain ( I adore the chain!! ) is vintage copper... it's shaped like mini- clasps I just love it! 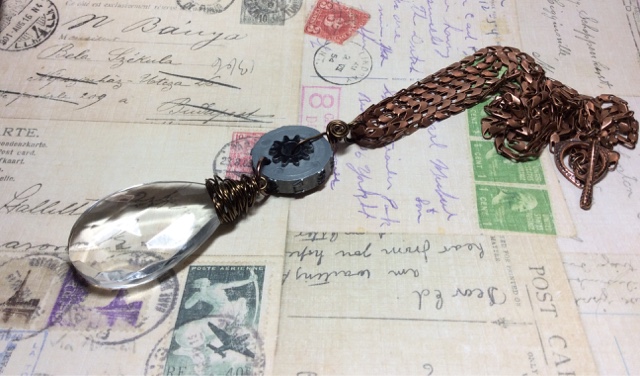 Done in time for Riverssance!

You can see this piece in person this weekend at Riverssance in Davenport Iowa this Saturday and Sunday.

I started this a couple of weeks ago, as you can see on my project tray.  Note the stickie on the dragonfly-- that's me planning out the holes to be drilled.  I'll be honest, I originally thought to make the dragonfly a bracelet, but messed up on drilling the hole too close to the edge-- making it unsafe to use that way.  With this design I turned those holes into decorative effects instead.  Once I laid out my design I thought the color of the dragonfly was too close with the vintage gears.  Normally I add color to the critter but this time I decided to add it to the gears.  I love how it turned out!  I think I'll add color to the gears more in the future. 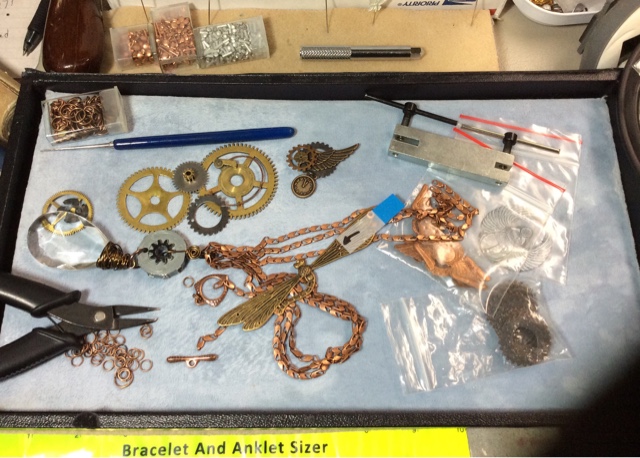 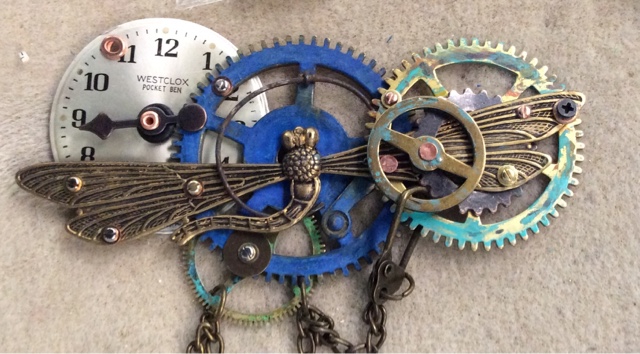 Just trying to catch up on my picture files--  here's a bunch of earrings made in the last couple of months. 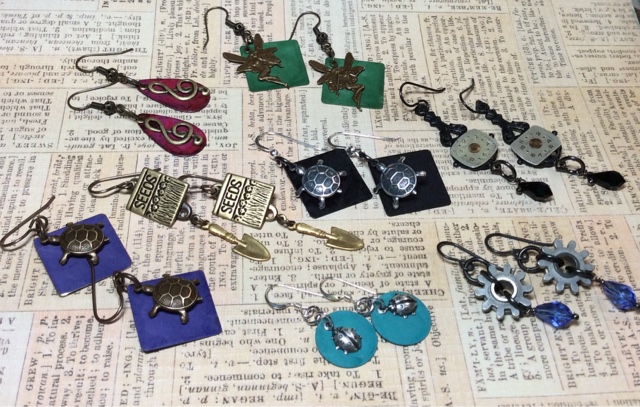 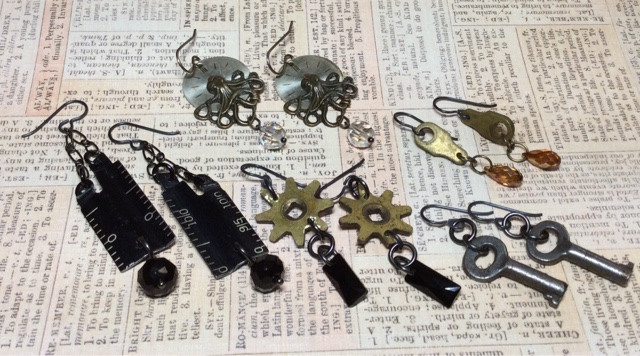 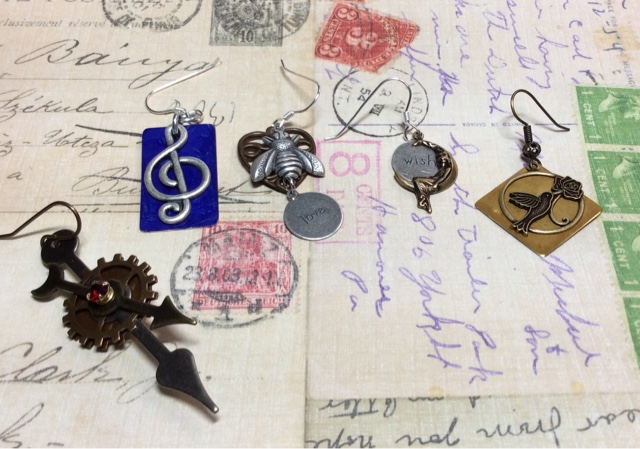 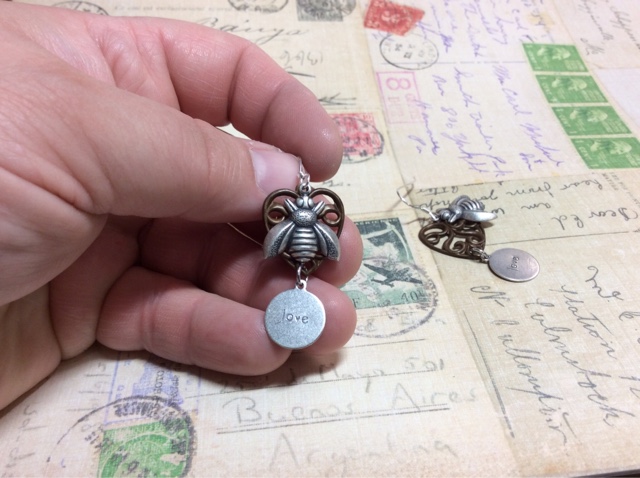 Good morning everyone!   Has anyone else noticed in the new Campbell Soup campaign one of the commercials features gay dads with a kid?   I think this is so awesome and really shows how far American thinking has turned on the issue of gay rights, marriage and all that jazz.  I mean a freakin' Campbell soup commercial !!!  Like is good.    This necklace is a old 1930's or earlier pocket watch with brass and crystal embellishments. 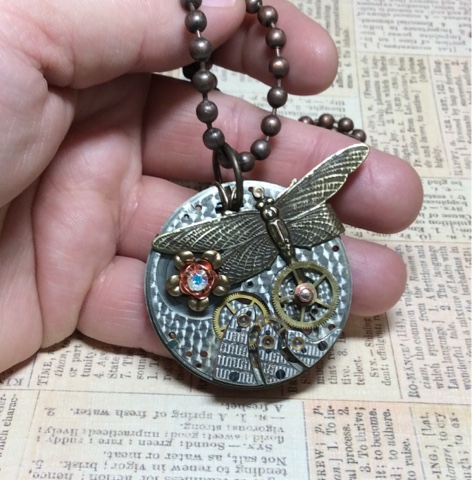 In the catagory of "Gee, I should make more of these" I would put leather cuffs.  Both of these are already sold. 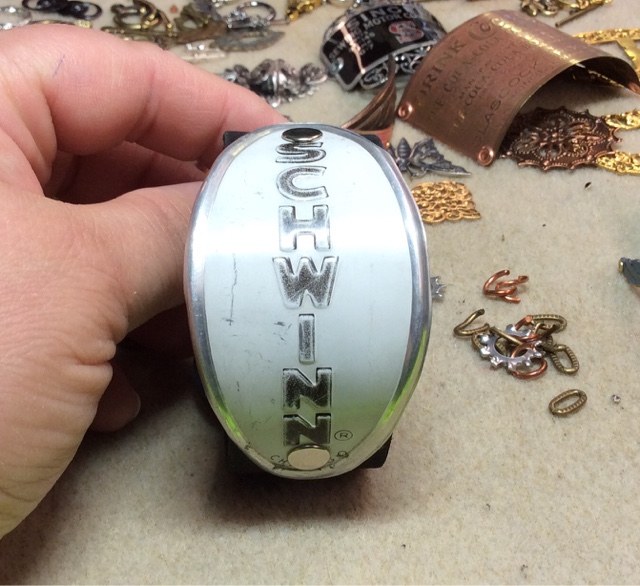 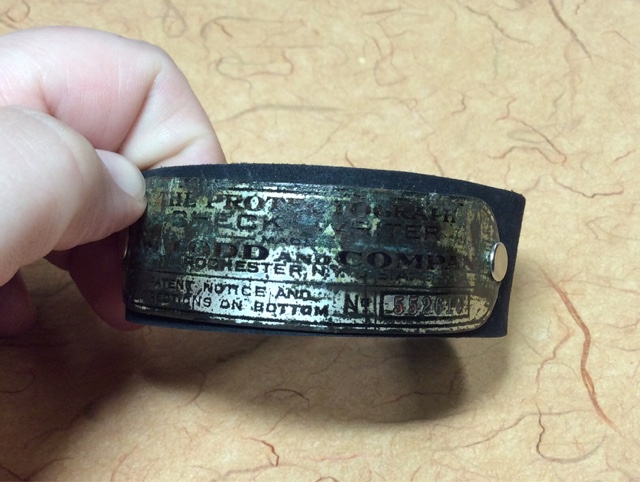 Bottom pic gives you an idea of what the leather part looks like. 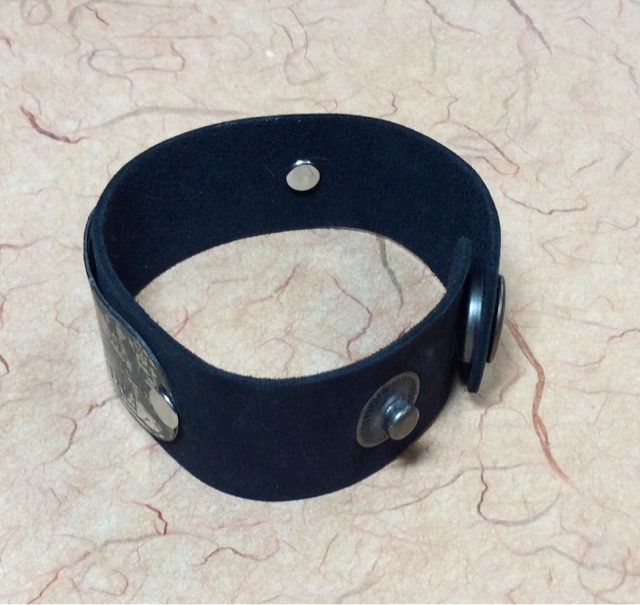 This is what my desk looks like right this moment.  I've got several items in different phases of construction-- 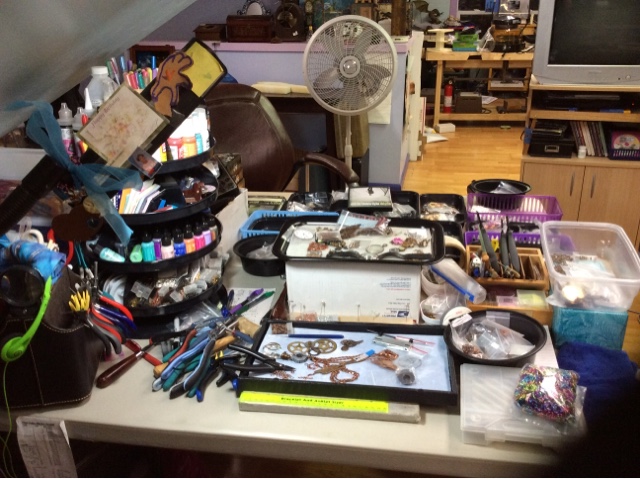 I'm not sure I've actually just come out and said this.. but my hubby is now a fully employed teacher.  This means that after 3 years, we are back to being a 2 - income family.  And this time around he's got a career instead of just a paycheck, a career where he can make a positive difference in other's lives.  I think his soul is happier now than it's been in years.

I'm so proud of him.. going back to school after more than 20 years!!   He sometimes has doubts on how well he's done / doing,  but his standards are - sometimes - well,  inappropriately high.  ( is that diplomatic enough?)

So Honey, I’m proud of you.

Meanwhile , I'm in my normal pre-show frenzy.  This weekend we have Artapalooza, in Cedar Falls, IA and it's one of my favorite shows every year.  It's well run, well patronized, right by 2nd hand shops and has 2 decent bakeries within  walking.   Everyone, from the show organizers to all the customers, are just so darn excited and friendly and genuinely happy to see us!

I don't want to disappoint these people!   So I'm working hard on getting as many new pieces done -- good pieces!! -- as I can in the limited time I have.   The only bad thing about this show is it's so late in my season, so I feel like I don't have any "good" stuff left to share with them.

I'm sooo glad to have project runway back!!

For those joining this blog in progress, here is the recap:

I've not watched it for about 3 years, because we dropped Direct TV to cut household costs down.  So for the last 3ish years, we have had DVDs , 1 tv with an digital rabbit ears and Netflix, when the wifi worked well enough in the house to use it. (Don't get me started on the wifi)

For the most part not having cable/satellite hasn't been all that bad.  I miss just turning the TV on and catching odd and kewl stuff more or less randomly.  I really just use it  for back ground noise while I do chores or work on jewelry design.  I just like having something on, I just think better that way.

Now almost 3 years later, we are getting satellite back!  Due to needing a new dish, it got bumped from this weekend to next weekend.

I just couldn't wait -- so I've been watching Season 14 of Runway to catch up, and I bought seasons 1-5 of Walking Dead so I'm all ready to go when it starts up again.

Colbert and Stewart are sadly no more.  I'm going to try out the new host for the Daily news, and Maybe I'll catch Colbert in his new gig.... but I'm gonna enjoy the hell out of catching up Dead and Runway! 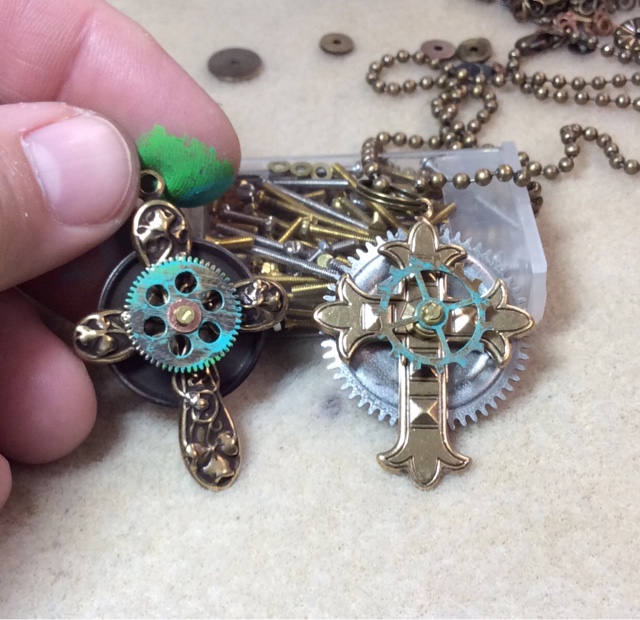 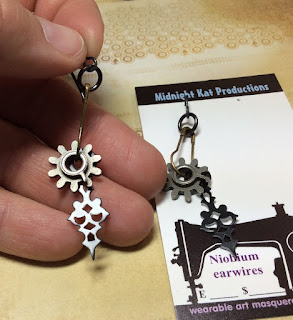 Clock hands and gears from an adding machine 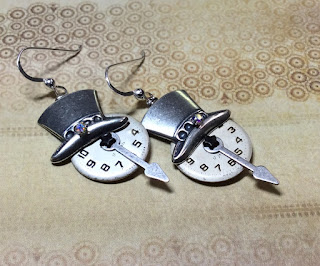 These are my "upscale" earrings... top hats and vintage watch faces make classy out on the town earrings 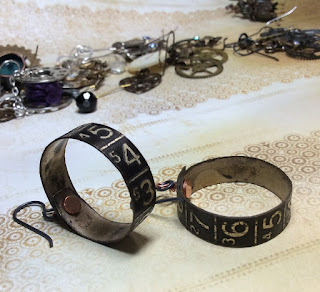 I got asked the question recently about if I used reproduction stuff or real stuff, like my singer tag bracelets. 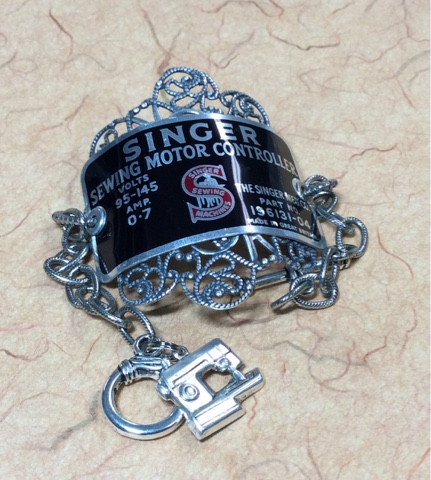 While I use some reproduction stuff, I usually incorporate it in with vintage materials. 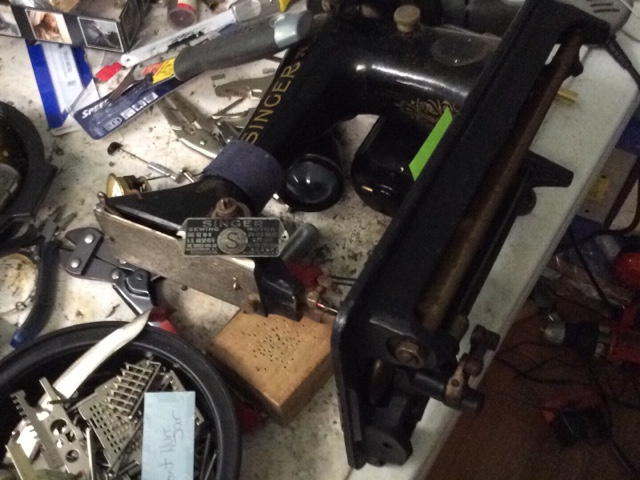 Since I'm usually going for a certain look, I can't always find what I need in real materials.  Also some of the vintage stuff needs backing or support.  Or I"m afraid it's too fragile to use.

A good example is my time in a bottle series.. real vintage bottles can be pretty thin.  Also hard to find them -- so I use new bottles. 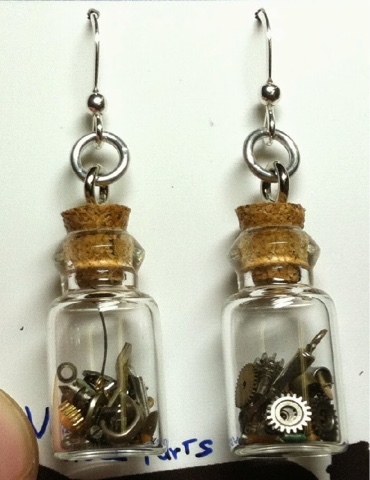 But I stuff them full of vintage clock and time parts.

The singer tags are real... off old sewing machines we get at flea markets and such.  They are not working, grungy and dirty... we buy them, strip them and then I clean up the parts I want to use.

I love using vintage parts as much as possible, especially the clock and watch parts.  I love faces and gears!

I don't think using real and fake mixed together is a bad thing, as long as when I sell them people understand what they are buying.  I try to make sure the vintage stuff is marked on my price tags.  Still I'm human and if you are looking at my jewelry just ask when you are not sure.
Posted by Kat BM at 12:21 PM No comments: