Merry Christmas and fairy dust for your holiday season....

I want to wish everyone a Merry Holiday Season, and I hope you have magic ( fairy dust) !! 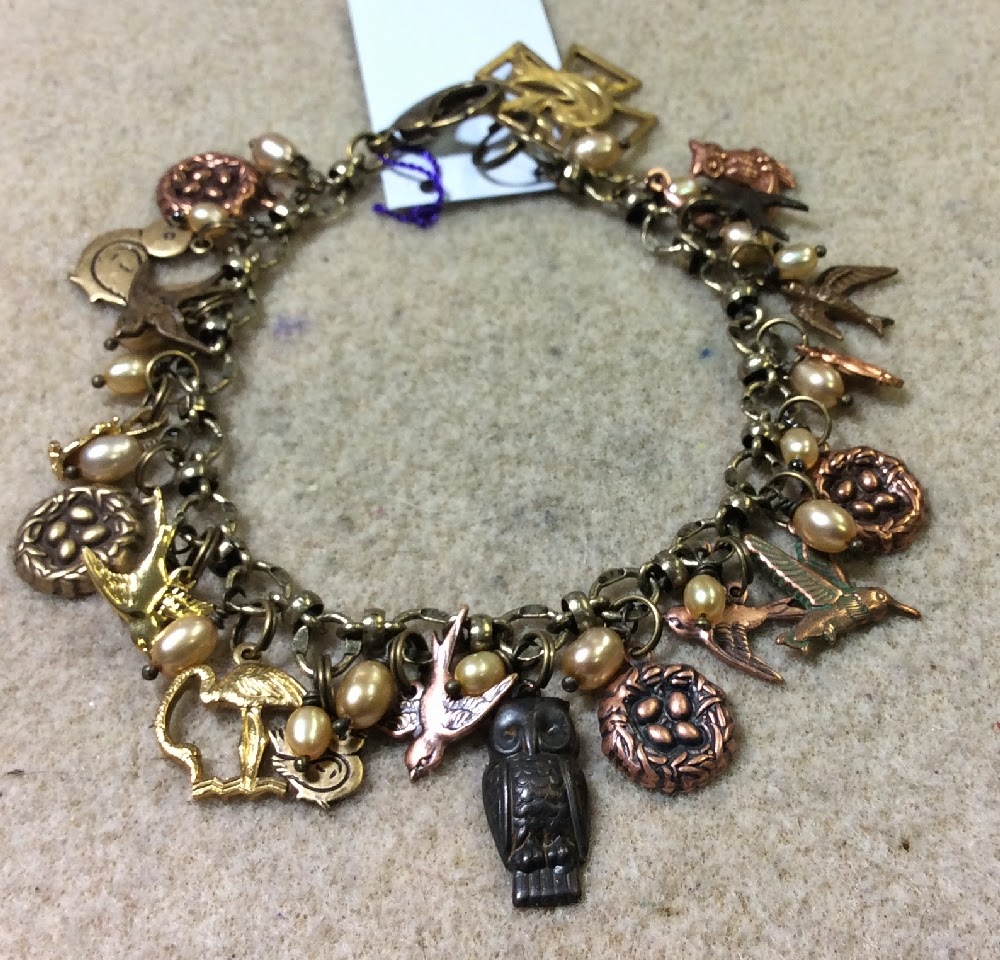 Not in a chatty mood tonight, nothing wrong, just busy and I want to get to the studio and keep working.  I've hit a creative streak, and I don't want to loose it!
Posted by Kat BM at 6:57 PM No comments: 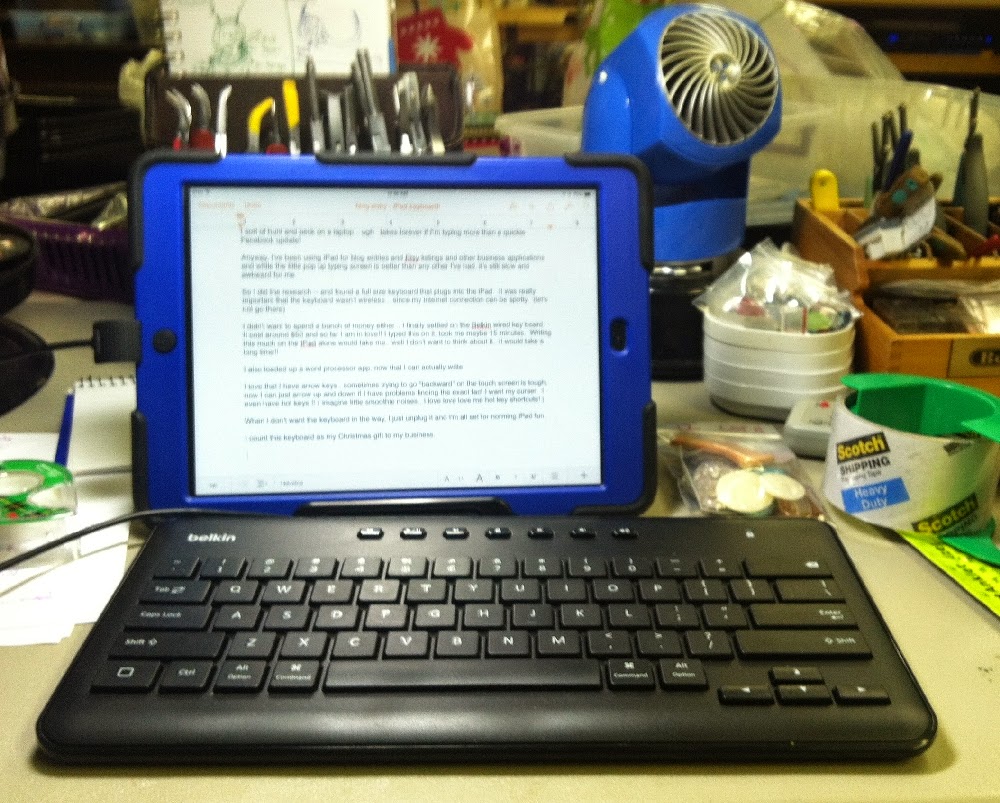 Back in April I got a iPad, and I love it. My only issue is writing anything over a sentence is kind of a pain.

Actually this is the main complaint I've had of laptops. All the laptops I've ever typed on sucked. The keyboard is often to small or the keys are arranged strangely. They have that little touch area for a "mouse" which I absolutely loath. Even when the key board is full sized I hate it.. it's attached to the screen so I can't move the keyboard around like you can with a desk top. ( I end up typing with my keyboard slightly angled.. impossible to do with a normal laptop) And laptop keyboards are apparently designed for people with really long fingers... I end up with my wrists sitting on the edge of the laptop and it's deuce uncomfortable!!

On a proper keyboard, I"m a fast typer.

I sort of hunt and peck on a laptop... ugh. takes forever if I"m typing more than a quickie Facebook update!

Anyway, I've been using iPad for blog entries and Etsy listings and other business applications and while the little pop up typing screen is better than any other I've had, it's still slow and awkward for me.

So I did the research -- and found a full size keyboard that plugs into the iPad. It was really important that the keyboard wasn't wireless... since my Internet connection can be spotty. (let's not go there)

I didn't want to spend a bunch of money either... I finally settled on the Belkin wired key board. It cost around $50 and so far I am in love!! I typed this on it, took me maybe 15 minutes. Writing this much on the IPad alone would take me.. well I don't want to think about it.. it would take a long time!!

I also loaded up a word processor app, now that I can actually write.

I love that I have arrow keys.. sometimes trying to go "backward" on the touch screen is tough, now I can just arrow up and down if I have problems finding the exact fact I want my cursor. I even have hot keys !! ( imagine little smoothie noises.. I love love love me hot key shortcuts! )

When I don't want the keyboard in the way, I just unplug it and I'm all set for norming iPad fun.

I count this keyboard as my Christmas gift to my business. 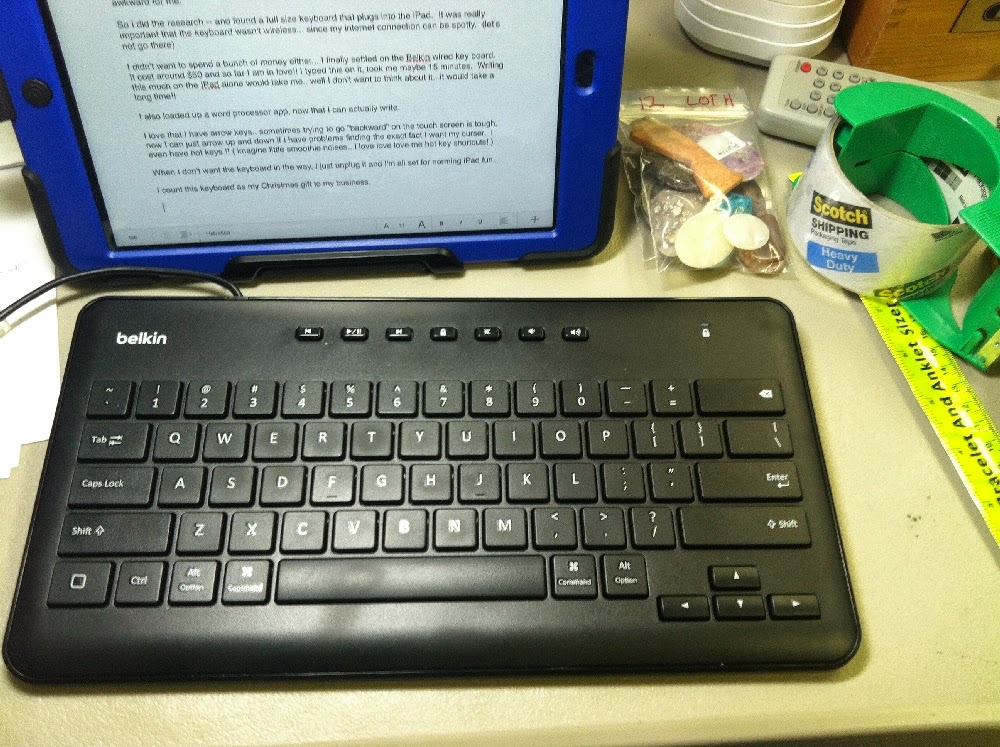 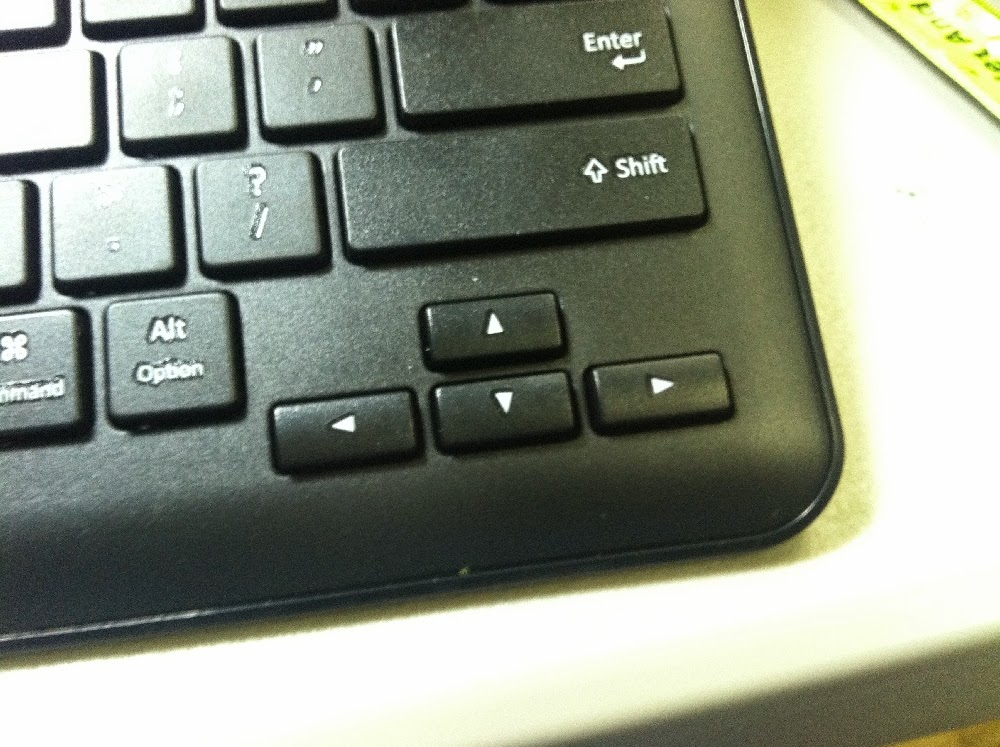 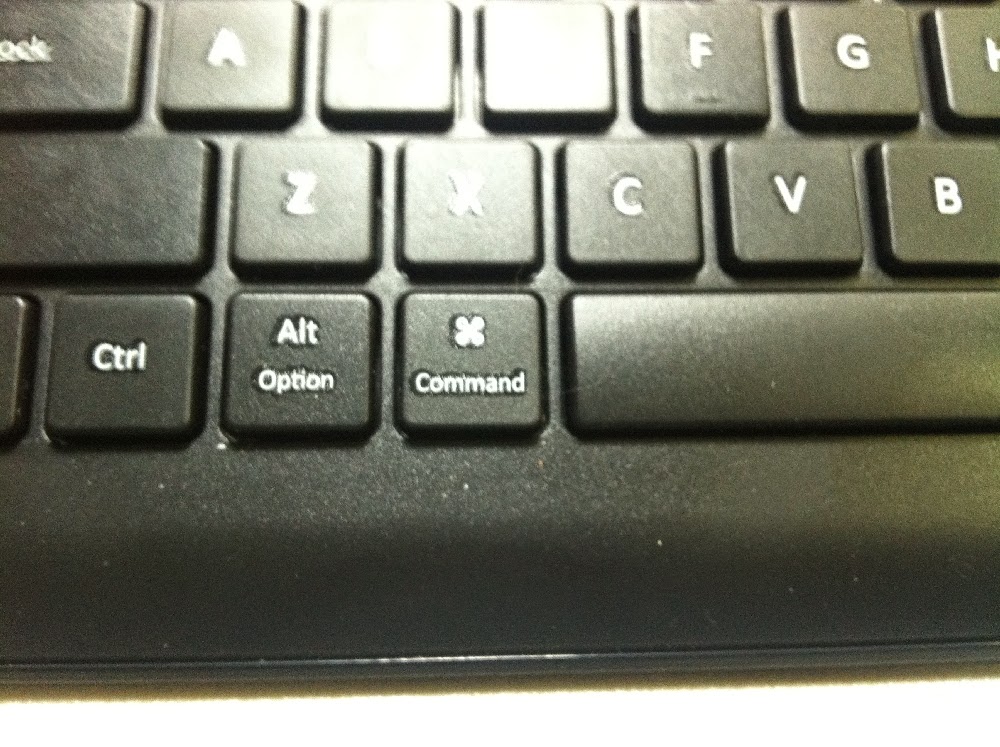 I often watch TV / DVDs when I'm working.. OK it's probably more accurate to say I listen while I'm working, with the occasional glance at the TV screen.

One of the shows is Once Upon A Time.  I'm watching this via netflix...

anyway, I think watch the series influenced this piece.  What do you think??

BTW, the show is pretty good.  I've only watch up to episode 5 of season 2.

I don't normally name my work, but this piece is " Before the stroke of Midnight"....

Any thoughts? What's your favorite fairytale?

It's that Time Again!

What time is it you ask? Application time!!!

Just about the least favorite part of making and selling jewelry is researching and applying to shows.  I've almost waited to long... 2 of the shows I've applied for have just a week left to get my application in!!

It's just such a grueling, time consuming process... and all the decisions you have to make and you won't know if they were the right ones until months later when that show flops or becomes your best show of the year.

Shows you have been in for years might suddenly drop you, and shows you didn't think you had a chance getting in accept you... it's the roller coaster from hell, and each ticket costs more every year it seems like.  Which means if it's a "bad" show or gets rain out, you are out that money, and travel and time to boot.

But oh, the good shows!  You meet such interesting people, both fellow artists and customers, and some of the art you see.. drool, I want! and damn how did they do that!?!?!?!?!

So, tonight I applied to 5 shows.  I'm guessing I will get into 3 of them -- if I'm lucky.  One of these I will fall on the ground in surprise if I get in.. but then it's good to stretch-reach at least one application each year.. who knows?  I got into Omaha Summer Arts Fest last year, and it was the best show we had all summer.  ( I hope I get into it again!!!!)

Juries are fickle, and not everyone gets what I'm making now -- my version of steampunk.  Even after over 10 years of doing shows, there is always 1 or 2 that really throw me.  It's hard not to take it personal when your art is like your 2nd child.

Over the next two weeks I need to get my apps in to 4 other priority shows, and a couple I'm still mulling over.  I need to research some more, see if I can find any other good prospects for next year.  Always keeping an eye out for something new.

Then the next round of applications will be late January.. Then again early March.

By May I will have applied to almost all the shows I'll be doing for the year, and probably half of them I'll already know my application status.

This year is the added fun and wrinkle ---- no clue what Jerry's schedule will be.  He graduates this Spring, and (finger's cross) will hopefully be a full fledged teacher that August.  But when in August? So I really need to be careful of later summer shows, at least this first year of teaching.

Right now it looks  we can make it through the summer without him taking a summer job.  But who knows, if someone offers him something he can't turn down, or what if the school he eventually goes to has a early start?  Or what if the car explodes, so he takes a temp job for the $$?  So I need to keep things flexible this summer, but still schedule enough to make what I need for the year.